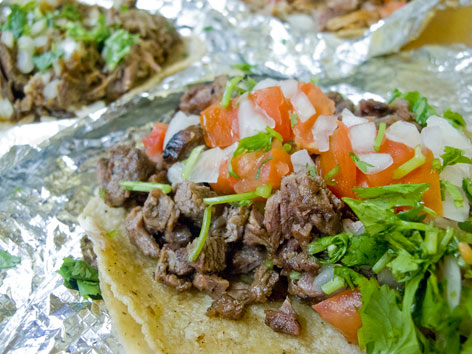 What: Los Angeles has been a taco town at least since the 1950s, when widespread taco shops across the city—pockets of which were already well established as Mexican communities—encouraged gringos to explore the most famous of Mexican snacks. (As a point of reference: In 1962, the first Taco Bell opened in nearby Downey, CA.) Today, tacos are perhaps bigger than ever in Los Angeles, supported, of course, by the city’s huge Mexican population, but augmented by the food-truck trend that’s currently sweeping the nation (see also: Austin)—a trend in some ways attributed, incidentally, to an L.A.-based fleet of trucks doing Korean tacos. Taquerias and taco trucks are spread all over the city—you no longer have to go to East L.A. for a great taco—and dutifully reviewed by websites like The Great Taco Hunt, making it easy to dive right in. While you can find many types of tacos here—al pastor, carnitas, lengua, cabeza, tripa—carne asada, or grilled meat, is generally the most common and popular, found just about everywhere.

Where: Our photo is from El Parian (213-386-7361; 1528 W. Pico Blvd., map), a hole-in-the-wall Mexican restaurant in Pico Union where the carne asada comes highly recommended—despite the fact that the place’s specialty is Jalisco-style birria, or stewed goat. We say try both. Note: The area around El Parian is known to be a bit dicey, so use caution.

Order: Carne asada taco and birria taco ($2.99 each). The carne asada, pictured, made with flap meat (the preferred cut in L.A., over skirt steak), is a carnivore’s dream: moist, a little salty, freshened with cilantro, tomato, and onion (with the requisite lime, radish, and hot sauce on the side). The birria packs a huge punch, a bit gamey but juicy and very flavorful. (We encourage you to try the $10 plate of birria, with broth, as well.) In a city of $1 tacos, these are pricey, but they’re very generous with the meat, and served on two delicious handmade tortillas.

Alternatively: So many options, so little time. Keep in mind that when it comes to taco trucks, nighttime is taco time; many don’t open till after 5pm or even 9pm. Among those on our radar: In Pasadena, the El Taquito Mexicano truck (490 North Lake Ave., map) does a popular carne asada (and lengua, chicharron, al pastor, etc.) taco for $1.25; in Mid-City, both Tacos Leo (323-743-5207; Venice Blvd & La Brea Blvd., map) and El Chato (1013 S. La Brea Ave.; map) get rave reviews for their $1 truck offerings (particularly the authentic al pastor at Leo’s); in East L.A., Tacos El Korita (E. Olympic Blvd. near Herbert Ave., map) is celebrated for its $1.25 tacos with handmade tortillas and various salsas. When in doubt, pull over where you see a crowd.