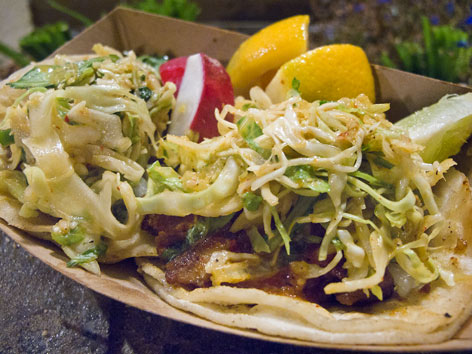 What: Korea meets Mexico in a homemade corn tortilla, with fillings like spicy pork, short rib, and kimchi. For Los Angeles, it’s the perfect marriage of K-town’s BBQ joints and Angelenos’ love affair with tacos (and the trucks that sell them), and the natural progression of what happens gastronomically when Mexicans and Koreans live in the same neighborhood together for decades. For the rest of the country, it represents a massive culinary movement, one in which mobile food trucks dish out inspired, gourmet treats to the masses at low cost, often providing their location via Twitter. One L.A. truck in particular is credited with (unintentionally) igniting it all.

Where: The truck—or trucks, as there is now a fleet of five—that will always be synonymous with Korean tacos here is Kogi BBQ (check website/Twitter for truck locations). Classically trained head chef Roy Choi moved from a string of four-star restaurants to the mobile food world—with partners, largely as a hobby—in early 2009, never suspecting the Korean taco would so forcefully take the city by storm. Kogi places a premium on high-quality ingredients, all-natural meats, and “secret” marinades and sauces that tend to include 20-plus ingredients.

Good to know: Kogi has a permanent indoor home at the Alibi Room (12236 Washington Blvd., map) in Venice, if you’re unable to track down a truck—or perhaps prefer to wash down your tacos and quesadillas with a beer or cocktail.

When: Tues-Sat, generally 11:30am or noon till about 2-2:30pm, then again about 6pm-9pm and later, 10:30pm-11:30pm. Each of the five trucks changes location three times a day, so check the website or Twitter for particulars. Lines are a common sight, so expect to wait for your food.

Order: The signature taco here is the short rib ($2.29), marinated—in a secret mix that includes soy sauce, kiwi, garlic, ginger, pear, and brown sugar—chopped, and grilled to juicy perfection, then topped with the regular Kogi taco fixings: sesame-chili salsa roja, lettuce and cabbage tossed in a Korean chili-soy vinaigrette, crushed sesame seeds, and sea salt, with cilantro, radish, lime, and orange on the side. Pictured with the short rib taco above is the delicious spicy pork taco, made with pork belly and shoulder marinated in a sweet and spicy gochujang sauce. Also recommended: kimchi quesadilla, short rib sliders, short rib burrito.