<< back to foods in Utah Valley 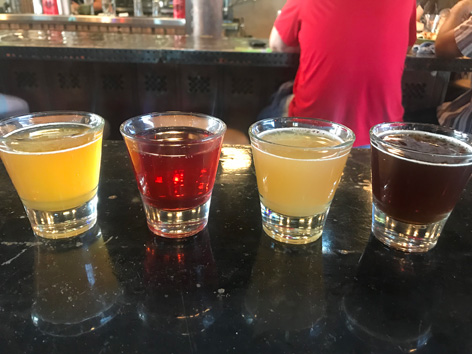 Despite the predominant Mormon culture, and famously arcane alcohol laws that until recently required bars to put up visual barriers on bars to shield diners from seeing behind the bar (to thwart temptation among minors, apparently), Utah is fast becoming a good place to grab a locally brewed craft beer. Like everywhere else in the U.S., craft breweries are popping up across the state, especially in Salt Lake County, but even in famously conservative Utah County too. Here’s what to know about buying and drinking beer in Utah.

About those liquor laws: While changes seem to happen all the time, two things to know about beer in Utah include: At least until later in 2019, when the law may shift again, if it’s beer sold in a grocery store or on tap in a bar or most restaurants, it must be at or below a certain percentage of alcohol (3.2 percent alcohol by weight, which is 4 percent ABV), meaning it won’t wipe you off your feet. (We did see some full-strength bottles, however, that were much higher in alcohol.) And also: If you’re at a restaurant and want a drink at the bar, or even at a brewpub that’s also a restaurant, you must order food too. Oftentimes places will have small inexpensive appetizers, like popcorn, on hand to satisfy that requirement.

Liquor stores, of course, are closed on Sundays. And it should go without saying, but do not drink and drive in Utah! Herein lie the strictest DUI laws in the nation, with a legal limit of .05 percent.

Good to know: Whiskey drinkers can get in on the Utah drinking action too: In 2008, the state’s first distillery since 1870, High West, opened in Park City, followed by New World Distillery in Eden and Sugar House Distillery in Salt Lake City.

Where: In Springville (and just opened in Lehi), Strap Tank Brewery (596 S. 1750 W., Springville, map) was the first brewery to open in Utah County since Prohibition … and it opened in 2016. (Expect that space to get crowded soon!) The mini-chain features big beautiful, industrial-feeling spaces with a vintage motorcycle theme and full-service restaurants.

Order: Pictured is a tasting flight (75 cents per), and you better believe we had to order some chips and salsa to go along with it. (We also had to order these just two at a time, which we did several times, and sit at a counter located a few feet in front of the actual bar, because we had kids with us.) But we were able to taste quite a few of the beers here, and we liked a bunch of them, including the Flathead American lager, the Laser Shark pale ale, and the Frank schwarzbier.

Alternatively: Ask for Utah-brewed beers wherever it’s being sold; we also found that the Harmons grocery chain had a great selection of Utah beers. We tried several beers from Uinta Brewing (1722 S. Fremont Dr., Salt Lake City, map), and loved them all, particularly the Baba black lager. If we’d had more time, we would have hit up the brewery circuit in Salt Lake City. Among those recommended to us, besides Uinta, are Epic Brewing, Fisher Brewery, and Proper Brewery, but there’s lots more to taste.