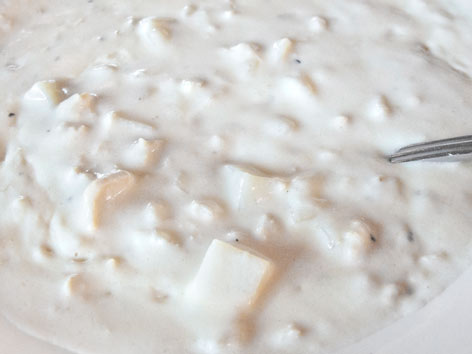 What: The thick, creamy white chowder associated with New England has inexact roots, but likely has been spooned up and slurped down in this area since the 1730s. The word and dish is thought to have come from France, possibly via England or, as one popular theory attests, via the Breton fisherman who migrated down from Newfoundland; these sailors apparently would cook their catch in large steam-boiler cauldrons called chaudières, perhaps providing an etymology for the word. In any case, what was customarily made with fish overseas was soon made with clams—large quahogs, specifically—on America’s northeast coast, where the bivalves are aplenty; other common ingredients are potato, onion, cream and/or milk, sometimes butter, and, traditionally, salt pork fat. (Suffice it to say this is one food for which you do not want to know the calorie count. Ignorance is bliss!) Like Long Island’s clam pie, it’s one of those simple use-what-you-have dishes that probably originated with the poor. Unlike the clam pie, New England clam chowder has flourished as a regional, and even national, dish over the years, because when it’s good, it’s so exquisitely good. It’s not unheard of to cross town, or even a state line or two, just to score a great bowl of “chowdah.”

Good to know: Clam chowder has gotten some notable literary love. In Herman Melville’s Moby-Dick, Ishmael describes the Nantucket clam chowder he dines on, and judges it “surpassingly excellent”; in a 1939 New England cookbook, Cape Cod author Joseph C. Lincoln wrote it was “a dish to preach about, to chant praises and sing hymns and burn incense before. To fight for…It is as American as the Stars and Stripes, as patriotic as the national Anthem.”

Note to pescatarians: It’s safe to assume, unless stated otherwise, that any chowder in New England will have pork in it, even if you can’t see bits of meat (the fat is often used).

Where: We love the chowder at Legal Sea Foods (multiple locations including 255 State St., map), a regional chain that dates to 1950s Cambridge. The restaurants are found all over the East Coast now, but it still makes sense in Boston to belly up to the bar here for some chowdah. Fittingly, the State Street branch on Long Wharf is just a stone’s throw from the harbor’s sea breezes.

Order: Don’t feel guilty and order the “lite” chowder here: You need the regular old New England clam chowder, and you’d better make it a bowl ($7.95). Of all the types of clam chowder you’ll find in Boston and beyond, this is the kind we like best: creamy, simple, flavorful. You’ve got your clams, your potatoes and onions, your rendered salt pork, your (optional) oyster crackers. What else do you need? A cold local beer. And maybe a plate of New England fried whole-bellied clams.

Alternatively: We also enjoyed the chowder at Kelly’s Roast Beef (multiple locations including 410 Revere Beach Blvd., map), in Revere, on the North Shore (15 minutes north of Boston); it’s thinner in consistency, but chock-full of clams and flavor—and what’s better than clam chowder with an ocean view? Another thinner, yet tasty and refined, chowder is that at Neptune Oyster (63 Salem St., map), where it makes a excellent first course for your next lobster roll.