<< back to foods in San Francisco 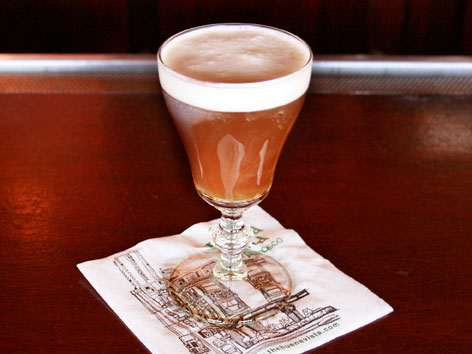 What: What do you get when you blend hot coffee, Irish whiskey, sugar, and cream? Magic, yes, but around here it’s called an Irish coffee. The drink is said to have been invented in a western Ireland airport in the 1940s—a chef added whiskey to hot coffee to warm up the American airline passengers on a cold night—and to have come to San Francisco in 1952 courtesy of Stanton Delaplane, a travel writer for the San Francisco Chronicle. He introduced it to the owners of the Buena Vista Cafe, a famed bar and restaurant in Fisherman’s Wharf, and helped them re-create, and then perfect, the deceptively simple recipe. (Apparently, the cream on top—aged and frothed just so—was the hardest part to get right.) The Buena Vista has since become a major destination for Irish coffee lovers; it reportedly sells upwards of 2,000 of them a day. Sweet, warming, and more than a little boozy, the best Irish coffees are bracing, balanced, and so good you’ll want a second.

Where: Grab a seat at the century-old Buena Vista Café (2765 Hyde St., at Beach St., map) and watch the magic happen—often, the barkeeps will make more than 10 Irish coffees at a time, the tulip-shaped glasses lined up along the bar, and patrons may get a card trick with their beverage.

Order: An Irish coffee ($9). The place is touristy and the food nothing to write home about, but you can get a pretty solid Bloody Mary at the Buena Vista if you’re so inclined.

Alternatively: There’s no question: The Buena Vista is the spot to try Irish coffee in San Francisco. But that doesn’t mean you can’t get tasty versions outside Fisherman’s Wharf. You might try Johnny Foley’s (243 O’Farrell St., betw. Cyril Magnin & Powell Sts., map) in Union Square, which not only has an enviable location in the center of the city, but a dueling piano show, too. We’re also fans of The Little Shamrock (415-661-0060; 807 Lincoln Way, at 9th Ave., map), an Inner Sunset Irish bar with board games to accompany your Irish coffee.