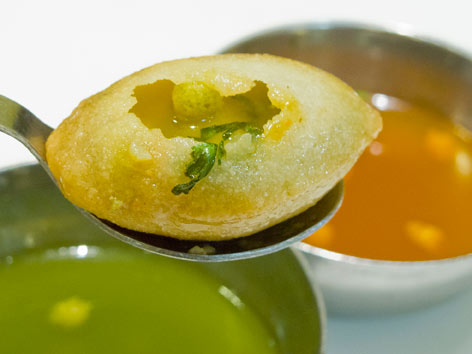 Gol gappa is a very popular chaat, or snack, that encompasses some of chaat’s best qualities—spicy, crunchy, saucy, satisfying—all in one explosive bite-size package. Also widely known as pani puri, it consists of a delicate, hollow, crispy-fried puffed ball (puri, or poori) that’s filled with potato, chickpea, onion, spices, and flavored water, usually sweet tamarind and/or spicy coriander and popped into one’s mouth whole, often while standing. The water part is what’s tricky for foreigners, as most of those tempting street gol gappa vendors use tap water (and often their bare fingers to stuff the puris). Luckily, a few well-known spots take care to use mineral water—not quite as "authentic," perhaps, but you won’t end up in bed for five days.

Order: The gol gappas here come six to a plate (40 rupees), their components neatly separated out for self-assembly: six puris, a bowl of potato-chickpea stuffing, and two bowls of flavored water. Poke a hole on the soft side of the puri, spoon in some filling, and then spoon in—or just dip the whole thing into—the flavored water. Eat it all in one go. Despite the decidedly “safe” nature of these, they are really fun to put together; we saw several local kids enjoying the process too.

Alternatively: You can find hygienic gol gappas among the shops and food stalls of Dilli Haat (map) in South Delhi, as well as at foreigner-friendly institutions like Haldiram’s (multiple branches including 1454/2, Chandni Chowk, Old Delhi, map). For an interesting twist, choke down a vodka gol gappa at the swish, multilevel Punjabi by Nature (multiple locations including P 19, Greater Noida, Sector 18, Noida, map): It’s a mouthful of flavored vodka—pepper, tamarind, jaljeera (cumin), or aampanna (green mango)—poured into a potato-filled puri (two for 295 rupees, including a beer chaser).