<< back to foods in Austin 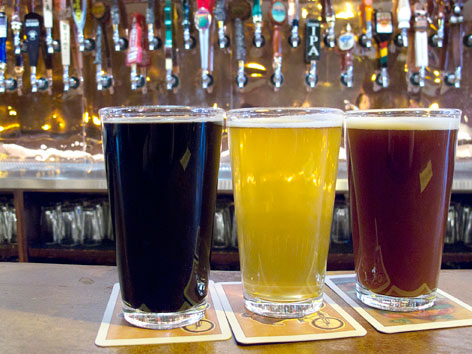 What: While some nights out in Austin call for a cheap pitcher of Lone Star or an ice-cold Shiner Bock, don’t overlook the city’s ever-growing roster of craft beers made right here in town. Austin’s beer scene seems to grow by the day, actually—at the time of writing, a generous handful of new breweries or brewpubs in or around Austin are in stages of development, so there will soon be even more options out there. The brews you’ll most often find around town are those from keg-only, East Austin-based Live Oak Brewing Company, which, in homage to the Germans and Czechs who settled and brought beer to Central Texas in the 19th century, employs the old-world brewing styles of Central Europe; Independence Brewing, doing easy-drinking, laid-back beers out of its South Austin facility; and (512) Brewing Company, based in South Austin and known for inventive offerings (an excellent Pecan Porter, a brandy barrel-aged Belgian strong ale) that combine old-world English and Belgian recipes with local, domestic, and organic ingredients. (You’ll also see a lot of the Real Ale Brewing Company, operating out of the Hill Country town of Blanco, about an hour west of Austin; its brews, such as the popular Fireman’s No. 4, are found in restaurants, bars, and shops all over Austin.)

Among the smaller, newer breweries open in the Austin area are the eco-conscious Thirsty Planet Brewing Company and Hops and Grain, the latter of which makes and sells dog biscuits with the grain left over from brewing; Circle Brewing Company, strict followers of the German purity law; and the farmhouse-style Jester King Craft Brewery, based in Austin’s Hill Country outskirts. Then there is South Austin Brewery, doing lots of strong Belgian-style ales, and Twisted X Brewing Company, focusing on (very Austin-appropriate) Tex-Mex brews—Mexican-style lagers, for instance, with a Texas twist (like jalapeños or agave nectar)—and probably at least 10 more breweries we haven’t heard about yet.

Where: So, where to sample this bounty of local brews? Since we like to try multiple beers in one shot, we headed straight to the excellent Ginger Man (301 Lavaca St., map), the downtown Austin member of a Texas “family” of pubs with a truly awesome craft beer selection that includes many regionals. Pictured (from left) is the smooth and creamy oatmeal stout from Independence; the light, refreshing (512) Wit; and Live Oak’s winter seasonal, Primus, a rich and roasty unfiltered Weizen beer. The Ginger Man also (usually) carries offerings from Jester King and Thirsty Planet, as well as Real Ale and Houston-based St. Arnold.

Alternatively: Visit the city’s breweries, brewpubs, or other beer bars.

In a class of its own is Whip In (1950 S. I-35, map), a funky convenience-store-turned-restaurant, bar, and brewpub. It has long been known for its terrific beer list, heavy on Belgians, Austin locals, and other U.S. craft beers, and in 2012 it opened a brewery of its own, Namaste Brewing, with a rotating selection of innovative Belgian-esque beers. (Whip In also serves up good Gujarati-style Indian food with a Texan twist—made, notably, with mostly local, all-natural ingredients—some of which the kitchen creates using local brews; for instance, a “beeryani” with pork belly, portabello, fenugreek, and (512)’s IPA and Cascabel Cream Stout). Finally, about 15 minutes north of downtown Austin, there’s the Black Star Co-op (7020 Easy Wind Dr. #100, map), called the world’s first cooperatively owned brewpub—where a pub regular can become a “member-owner,” or where you might just go to sample from the 10 rotating house brews, good Austin beer list, and/or local, seasonal pub fare.