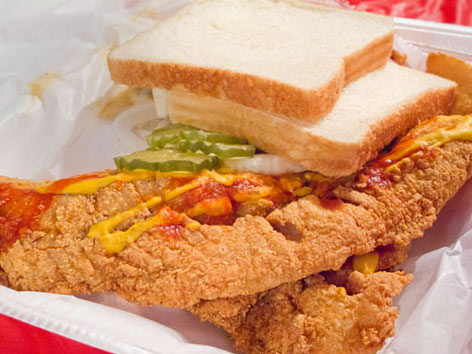 What: Hot fish is the cousin to hot chicken: deeply fried and deeply spicy. Like its cousin, the history of this distinctly Nashville dish lies deep within African-American culture here. But its preparation is different: Recipes can vary a bit from place to place, but “hot fish” traditionally means breaded, fried whiting—usually two fillets—topped with hot sauce, mustard, raw onions, and pickles, and served on or with two slices of white bread. Ostensibly, it’s a sandwich, but the typically gigantic, messy fish fillets are a bit unwieldy between the small squares of bread.

Where: Bolton’s Spicy Chicken and Fish (two locations including 624 Main St., map)—its name doesn’t mince words and its East Nashville setup, a small sparse room with a few picnic tables and TVs, is equally frill-less. A sign instructs you to knock on the door when you’re ready to order through the small takeout window.

Order: The monster “hot fish” sandwich with whiting ($5.50), ordered to your preference—mild, medium, or hot. (Cheese is also optional.) This fried-to-order fish is giant, super messy, and basically impossible to eat as a sandwich. Be forewarned that “medium” and “hot” are two different animals here: The former is the traditional version, served with mustard, pickles, onion, and a drizzle of hot sauce—tastes and textures that all somehow mesh together. The latter, on the other hand, means your fish will be heavily dusted with a dry spice that involves a lot of cayenne. We started out with a medium fish but, being spice addicts, soon craved more fire. The staff kindly obliged our request for an upgrade, and our fish was given a shake of the sneeze-worthy dry spice. This we liked: The powder covers the fish better than the sauce, imparting more consistent heat.

Good to know: Some people swear by Bolton’s hot chicken as well (though it’s not quite as aggressive as Prince’s), including the spicy “chicken on a stick”—highly spiced boneless meat on a skewer. Lots of sides are on offer here: corn on the cob, turnip greens, various beans, a creamy, peppery mac-and-cheese. The most traditional side is also the most unexpected (for some of us): spaghetti and tomato sauce.