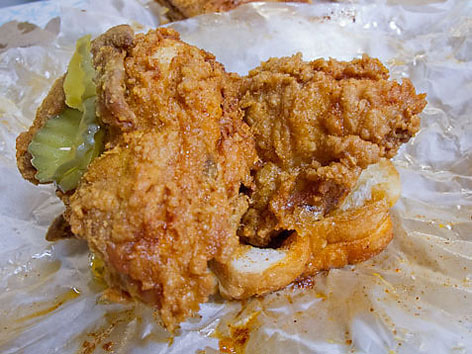 What: Hot chicken—meaning spicy hot, brined in a cayenne rub before being dipped in flour and deep-fried—is a true Nashville specialty. If you believe the lore, the dish was born out of revenge: As punishment, a certain womanizing male was handed a dish of outrageously peppery chicken by his lady friend, but the dude loved it—and so did his friends. If you’re a fan of fried chicken and spicy chicken, this dish has your name written all over it.

Where: Family-run Prince’s Hot Chicken Shack (two locations, including the original at 123 Ewing Dr., map), in the middle of a divey strip mall, is the original bringer of the pain—the man in the not-so-cautionary creation tale, Thornton Prince III, is the great-uncle of the current owner, André Prince Jeffries. Here, chicken breasts, legs, and wings are pan-fried to order (bring your patience) in cast iron. “No frills” doesn’t begin to describe this place. Out of a takeout window framed by ads for bail bonds and lawn work, the chicken is served in oil-spattered brown paper bags atop two slices of white bread—intended to soak up grease and offer respite from the heat—plus a few sliced pickles. Not in the bag: plates or utensils.

Ed's note: As of Dec. 2018, the Ewing Dr. location of Prince's is temporarily closed following an accident. It's other “South” location at 5814 Nolensville Pike (map) remains open.

Order: Much has been written (and filmed) about just how hot Prince’s “hot” is (not to mention the “extra hot”), so you might know by now that it’s wise to start with “mild” or “medium,” depending on your tolerance. We had one medium leg ($6) and one mild, much meatier breast ($7), both sold as a “quarter”; the latter had only a slight bite to our (relatively spice-tolerant) palates, but really nice flavor. The medium, meanwhile, colored a darker red, seemed manageable at first—and then its deep, cayenne-y heat kicked in, sending us scrambling for liquids and lip balm. The grease is inescapable on both, making these extremely messy to eat—get extra napkins! More good advice: Don’t drink anything carbonated, don’t touch your teary eyes, and, for heaven’s sake, wash your hands before using the bathroom.

Before your first visit to Prince's, we suggest you read this New Yorker article, in which it is quoted: “First-timers have been advised to prepare for hot chicken by putting a roll of toilet paper in the freezer at home.”

Good to know: Prince’s hours can vary, and because everything is made to order, you should expect a wait—anywhere from 15 minutes to an hour. Be prepared, or try to call ahead to place your order (if they answer the phone, that is).

Alternatively: If you’re going to do it just once, it has to be Prince’s. But if you’re interested in comparison-tasting, we also like Hattie B’s (multiple locations including 112 19th Ave. South, map), with its great little porch, hip vibe, and delicious sides (see pic here). But note that that, and other places around Nashville and well beyond, is the hipsterfied (and some would say culturally appropriated) version of the hot chicken experience. You might also try Pepperfire Hot Chicken (2821 Gallatin Pike, map), another beloved spot (with a walk-up window), or legendary hole-in-the-wall Bolton’s Spicy Chicken and Fish (multiple locations including 624 Main St., map) in East Nashville (see also: hot fish). Across from the sprawling Opryland Hotel, there’s Scoreboard Restaurant & Sports Bar (2408 Music Valley Dr., map), a dive bar that does hot chicken in the traditional breast-and-white-bread manner, as well as in tenders and “bites”—with heat levels ranging from “sissy” to “Satan’s tongue.” Good luck.