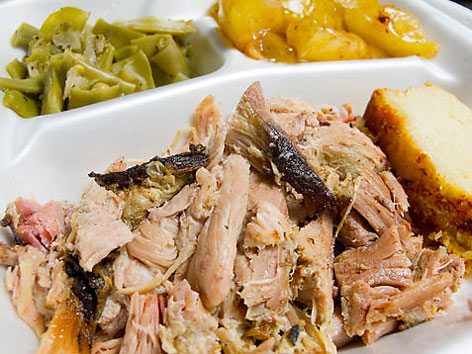 What: Nashville’s BBQ is not as renowned as Memphis’s, but it’s still darn good—and it’s only getting better. In this town, pork is king, but you’ll find BBQ that runs the gamut from pulled pork and ribs to smoked turkey and brisket: moist, smoky, flavorful meats to satisfy those carnivorous cravings.

Where: It may have a location right in the heart of honky-tonk central, but Jack’s BBQ (416 Broadway, map) remains a decent BBQ choice here, with quick assembly-line service and a nice array of meats and sauces. If you can, try to visit their larger, less-touristy branch at 334 West Trinity Lane (map).

Order: Save the Texas (sausage, brisket) and St. Louis (ribs) styles of meat on the menu for your future travels, and stick to the moist, hickory-smoked Tennessee pork shoulder, chopped up in front of you before it’s served. Sandwiches are available, but for $9.99, you get a plate of meat with two veggies on the side—we liked the sweet grilled apples and soft green beans, though mac-and-cheese counts as a vegetable in Nashville, too—plus corn bread, which is just average here. Feel free to experiment with Jack’s award-winning sauces, offered on the side in to-go cups. We loved them all, but especially the tangy Tennessee vinegar-based, the Carolina mustard-based, and the smoky Kansas City-style sauces.

Alternatively: There are many choices here, and a fair amount of turnover: Seems that for every beloved old place that sadly closes, something new and great comes along. Of the newer breed, we love Peg Leg Porker (903 Gleaves St., map), in the Gulch—particularly for its ribs. We have long been fans of Nolensville-based whole-hog specialists Martin’s Bar-B-Que Joint and its excellent hickory-smoked pulled pork and “redneck” tacos; pit master Patrick Martin has since expanded his empire to a few other locations, including one in Nashville (3108 Belmont Blvd., map). You might try B&C BBQ (two locations including inside the farmers market food court at 900 Rosa Parks Blvd., map), where the sides are just as popular as the meaty sandwiches and ribs, or snag a picnic table on the screened-in porch at Hog Heaven (115 27th Ave. North, map), a small shack celebrated for its tangy, slightly spicy white BBQ sauce. For a fun variation on this Nashville favorite, try the “Local BBQ” taco at locavore Tex-Mex spot The Local Taco (mulitiple locations including 4501 Murphy Rd., map)—it’s where 12-hour pit-cooked pork butt meets jalapeño cole slaw and house-made chipotle BBQ sauce inside a locally made soft flour tortilla.

Bonus: See our Q&A with pit master Patrick Martin on the EYW Blog!