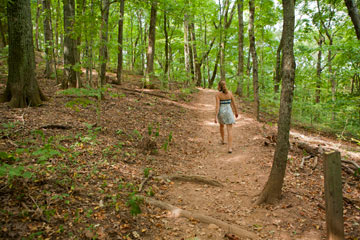 Centennial Park is the nearest green oasis to downtown, and it doesn’t disappoint. Its 132 acres, often the site of local craft fairs and free summer concerts, offer a nice one-mile loop trail, partly along Lake Watauga, that’s popular among area walkers, joggers, bikers, and roller-bladers. Wander off the paved trail inside the park and you can’t miss the city’s quirkiest landmark: a full-scale replica of Greece’s Parthenon, down to the 42-foot statue of Athena. Now an art museum, it was built for Tennessee’s Centennial Exposition back in 1897 (incidentally, Nashville has long been called the “Athens of the South” due to its high concentration of colleges and universities).

If you drive out toward the famous Loveless Cafe for a real Southern country breakfast, swing by the leafy Warner Parks, about nine miles from downtown Nashville. As the name suggests, there are two parks here, adding up to 2684 acres of forest and field—Edwin Warner, which offers short, color-coded trails ranging from 150 yards to 2.5 miles; and Percy Warner, with loop trails running 2.5 and 4.5 miles in length. There’s also a one-mile trail that connects the two brother parks.

Also south of town near Loveless Café—in the same compound as Loveless, actually—you can rent wheels from Trace Bikes (8400 Hwy 100, map) and explore the scenic Natchez Trace Parkway, a paved tristate road that winds 444 miles—out of Tennessee, through Alabama, and into Mississippi—over an old footpath once used by Native Americans and early explorers (there’s lots more hiking opportunities here as well). There’s no shoulder on the parkway, but you’ll encounter few cars. Road bikes cost $40 for four hours; $55 for 24 hours (it is recommended to call ahead to reserve your bike).

Those honky-tonks aren’t just for drinking, folks! Burn some of the day’s calories come nighttime by dancing in the area’s music bars—Robert’s Western World (416B Broadway, map), for one, has a great little dance floor and some of the best country-rockabilly-bluegrass you’ll find downtown. You might also check out the touristy-but-fun free line-dancing lessons held most days in the early evening at the massive Wildhorse Saloon (120 2nd Ave. North, map; call ahead to confirm times).