<< back to foods in Philadelphia 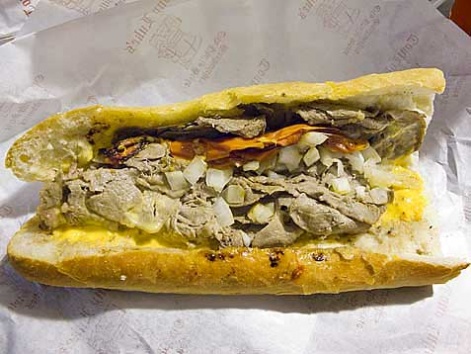 What: Nearly synonymous with Philadelphia, the cheesesteak was allegedly developed by Pat and Harry Olivieri in South Philly in the 1930s, when chopped steak (usually thinly sliced ribeye or top round) cooked on a griddle was served in a hoagie roll (cheese, it seems, was a later development), leading to the founding of Pat’s King of Steaks. Somehow, Cheez Whiz has become the most traditional topping (as well as sauteed onions and peppers, if you like), though American and provolone cheeses are readily available too. Today cheesesteaks are everywhere, and they’re definitely not created equal. Everybody, of course, has a favorite to swear by—much like the effect of pizza on New Yorkers.

Order: A cheesesteak ($8.25) “wit” Wiz, onions, and peppers (the “hot” ones aren’t that hot, FYI). The Wiz is good for its melting quality, having the effect of coating the steak pieces in gooey yumminess—though admittedly another cheese would probably impart more genuine “cheese” taste. White onions are chopped; peppers are draped languidly across the sandwich. Ketchup, pickles, and hotter peppers are available at a self-service stand. Also great here: chicken cheesesteaks ($8.25) and Italian roast pork sandwiches ($9). (You can save your calories and pass on the mushy cheese fries.)

Good to know: Catching a Phillies game? Look for Tony Luke’s in the concession area of Ashburn Alley at Citizens Bank Park.

Alternatively: If you’re willing to drive further afield, lots of locals swear by Steve’s Prince of Steaks (multiple locations including 7200 Bustleton Ave., map), where the white American cheese is helpfully pre-melted. Closer to Center City, a good bet is Jim’s Steaks (400 South St., map) on always-lively South Street. Still, it’s hard not to visit the original greasy-cheesesteak mecca at least once in your lifetime—Pat’s King of Steaks (1237 East Passyunk Ave., map), a brightly lit beacon in South Philly that’s conveniently open 24/7—or do a late-night taste test of Pat’s and longtime rival Geno’s Steaks (1219 South 9th St., map) across the street, also open 24 hours. Together, their neon lights could illuminate a small village for life, but gimmicks aside, they remain integral parts of Philly’s culinary heritage.