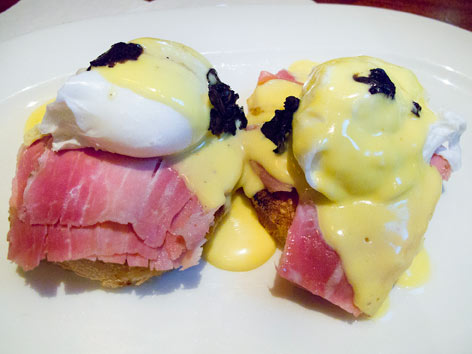 What: A brunch staple born in NYC but popular well beyond, eggs Benedict consists of poached eggs and Canadian bacon or ham on an English muffin, topped with hollandaise sauce (a rich and creamy concoction made with egg yolks, butter, and lemon juice or vinegar). Its origins, though murky, have been well documented, and boil down to this: Either a hungover Mr. Lemuel Benedict first ordered the dish at the Waldorf Hotel (now Waldorf-Astoria) in 1894—notably, with toast and bacon rather than an English muffin and ham—or a Mrs. LeGrand Benedict first ordered it at Delmonico’s in the Financial District around the same time (or, according to that restaurant’s website, in the 1860s); in both stories, the respective chefs at each restaurant were inspired to run with the dish thereafter. Whichever story you believe, it’s safe to say the dish was born in turn-of-the-20th-century New York City, in the kitchen of a fabled restaurant that’s still in existence—and that someone of the surname Benedict had quite a way with eggs and ham.

Where: Without taking sides in this particular creation myth, we got our eggs Benedict at Delmonico’s Restaurant (56 Beaver St. betw. Broad & William Sts., map), a Financial-District steakhouse first established in 1837 that, despite not actually being connected to the Delmonico family, claims many inventions and firsts (including that of “America’s first fine-dining restaurant” and first eatery to use tablecloths and printed menus). The restaurant, famed for its eponymous steak, opulent dining rooms, and power-player clientele, has a more casual (in atmosphere and price) “Next Door Grill” that’s ideal for those patrons not on an expense account.

Order: The eggs Benedict ($16), on the Grill room menu (it can be ordered in the main dining room as well). It’s built simply yet elegantly with thin slices of prosciutto cotto folded beneath two perfectly poached eggs—one cut is all it takes to release the rich flavor explosion within. As per the (alleged) original request of Mrs. Benedict, the dish is topped with chopped truffles, which add a nice earthiness to the overall creamy, salty, satisfying taste.

Alternatively: There’s always the classic eggs Benedict ($21) at the Waldorf-Astoria (301 Park Ave. at 50th St., map)—specifically, at Oscar’s Brasserie, the breakfast-and-lunch-focused eatery named for Oscar Tschirky, the maître d’ famed for creating the Waldorf salad and other dishes (including having a hand in the other original eggs Benedict) between 1893 and 1943. Or, history aside, you can find this dish at countless brunch spots around the city, including the ever-popular Essex (120 Essex St. betw. Delancey & Rivington Sts., map) on the Lower East Side, where $23.95 famously buys you brunch plus three drinks (mimosa, Bloody Mary, or screwdriver)—plenty enough to toast to both of the eggs Benedict inventors.