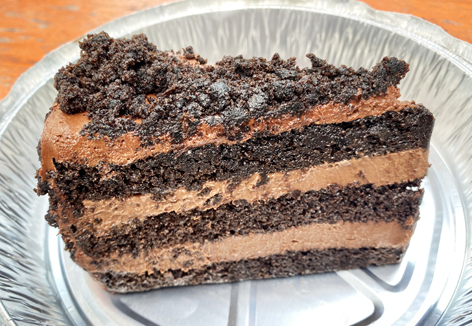 The very rich, chocolatey Brooklyn blackout cake is associated with an iconic chain of Brooklyn bakeries called Ebinger’s, which went bankrupt in 1972 after 74 years in business. Ebinger’s blackout cake was practically a cult favorite: a three-layer devil’s food cake with dark chocolate pudding giving it its signature stripes, covered in chocolate frosting, and topped with chocolate cake crumbs. It is for serious chocolate lovers only!

Why is it called blackout cake? It’d be a good guess that it’s because of the many layers of chocolate in this cake, but it’s also said that the name refers to the blackout drills performed in Brooklyn by the Civilian Defense Corps during WWII. For these exercises, residents around the borough would practice shutting off lights and blacking out windows in their homes to protect battleships leaving from the Brooklyn Navy Yard under the cover of darkness.

For some time it was hard for New Yorkers to find a real Brooklyn blackout cake, but now there are a few spots where you can reliably get your hands on a slice (or a whole cake).

Where: Our slice of cake came from an unexpected place: Cobblestones Pub and Biergarten (117-18 Queens Blvd., map) in Forest Hills. Sure, it’s the wrong borough, but they source their cake, one of only two dessert options, from a Brooklyn bakery. Also, we love this 36-year-old place for its expansive patio seating, German beers, and delicious giant Bavarian pretzels.

Order: You’ll probably want to eat something else here first, like a pretzel and a bratwurst, and have some beers, but THEN … get some Brooklyn blackout cake ($9.95). It’s a generous slice, and it’s absurdly delicious. As my Brooklyn born-and-bred in-laws pointed out, the pudding in this cake is more akin to mousse and is lighter in color than more traditional blackout cake—but they also agreed it was terrific. (We brought ours home to share with them!)