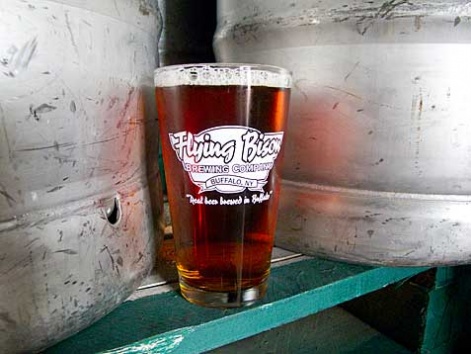 What: Buffalo-area beer used to be a much bigger industry than it is now, unfortunately. Today you’ll see lots of Canadian beers in bars and a handful of Rochester-based beers, like Genesee, aside from the usual suspects. But before you reach for that Molson Ice, look to see if any beers from Flying Bison Brewing Company are available—the city’s one and only distributing craft brewery (there are a few good brewpubs in town too; see below). Its flagship beers remain the strong, full-flavored Aviator Red; the nutty Rusty Nail (Vienna-style amber); and the light-bodied Buffalo Lager.

Where: Many area bars carry their brews, but it’s fun to visit the Flying Bison brewery (716-873-1557; 491 Ontario St., map) and meet some of the friendly staff. (Bonus: There’s a soda guy there who makes excellent ginger, root beer, and orange cream sodas; ask about ’em if you go.)

Good to know: If you’re in Niagara-on-the-Lake (Ontario) and want a break from the local wine, check out the Olde Angel Inn Restaurant & Pub (224 Regent St., Niagara-on-the-Lake, map); its 24 beers on tap include Ontario microbrews and a few house beers, which come courtesy of nearby Niagara Falls Brewing.