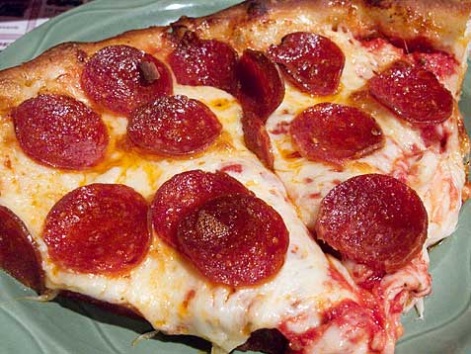 What: Buffalo-style pizza isn’t just pizza topped with chicken, blue cheese, and hot sauce (though that exists too). It’s cheesy and doughy with a healthy amount of sweet tomato sauce and a thickness somewhere between the traditional pies of New York and Chicago; the pepperoni on top—of all the add-ons, pepperoni takes precedence here, and there will be a lot of it—should be charred and curled around the edges. This is a robust pie with some attitude.

Where: We liked the pepperoni pizza at Pizza Junction (1269 Erie Ave., map) in North Tonawanda, about 20 minutes north of central Buffalo. The menu is long and varied, but the pizza is served on a pedestal, which we took as a good sign.

Order: The pepperoni pizza ($12.35-$20.65 for pies; slices and larger trays also available)—ours had a good deal of sauce, a thick layer of mozzarella cheese, a doughy crust that was extra-thick around the edges, and a generous helping of pepperoni (which could have been more burnt, but was still crisp, pooling with oil and packing a punch). Or go all-out Buffalo and try the beef on weck pizza (with roast beef and horseradish) or the chicken finger pizza (with hot sauce and a side of blue cheese).

Alternatively: Buffalo pizza is a polarizing topic in town: Not one local we polled agreed on a favorite! But some other popular spots are Bocce Club Pizza (multiple locations, including 4174 N. Bailey Ave., Amherst, map) and La Nova (two locations, including 371 West Ferry St., map). Also, the pizza ($11-$15) at wing-famous Anchor Bar (1047 Main St., map) isn’t half-bad; we liked the extra-charred pepperoni there.