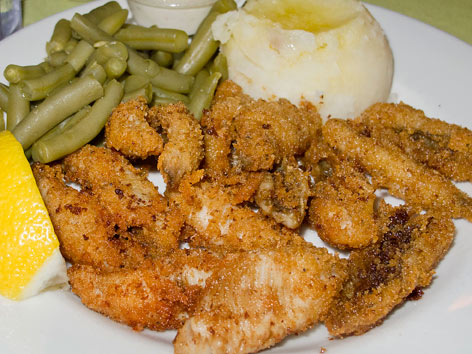 What: Michigan is surrounded by lakes, and Detroit is on a river between two of them (Lake Erie and the smaller Lake St. Clair). Sport fishing is big-time around here, so it’s no wonder that fish is a common sight on menus around town—especially for the Friday fish fry, a popular Midwestern Lenten tradition offered all year in certain restaurants (see also: Buffalo & Niagara Falls). Yellow perch, a tasty freshwater fish that’s abundant in Lake Erie and available year-round, is a standard main course. Sometimes you’ll also see freshwater cod (burbot) or pickerel, which is often actually Lake Erie walleye.

Where: Our perch is from the historic Polish Village Café (2990 Yemans St., map) in the once-overwhelmingly-Polish city of Hamtramck, 12 minutes from downtown Detroit; the restaurant offers it as a Friday special year-round. Old-world spots such as this are generally where you’ll find the (Christian) Friday-fish-fry tradition still alive and well.

Order: Offered on Fridays only, the pan-fried lake perch ($11.25) is awesome here: Individual pieces of the fish are fried for maximum crispiness; the firm, moist flesh inside is perfectly complemented by a simple squeeze of lemon. It’s served with tasty mashed potatoes, a side of tartar sauce, and an unfortunate pile of limp green beans—the only loser on the plate. Ask your server if you can substitute something else. And don’t miss the excellent Polish dishes here; you might also try the mysteriously named city chicken.

Alternatively: Two other popular Polish restaurants in the same area also do fish on Friday: the Anthony Bourdain-approved Polonia (2934 Yemans St., map), right down the street; and in Poletown East, just south of Hamtramck, the ancient Ivanhoe Café (a.k.a. the Polish Yacht Club; 5249 Joseph Campau St., map), which is supposed to be great but has very limited hours (Mon-Thu (closed Mon in summer), 11am-3pm, but kitchen closes at 2pm; Fri, 11am to 8pm, but last reservation at 7:15pm).