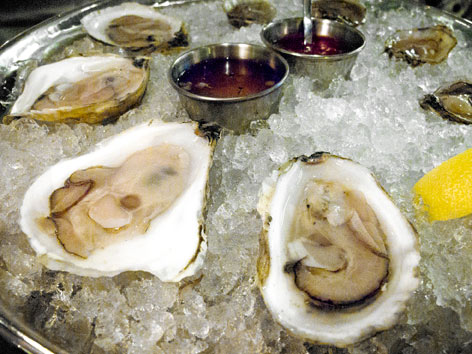 What: Like those around New York City, the waters around Boston—the Neponset, Mystic, and Charles Rivers—were once brimming with native oysters. Thanks to a deathly mix of pollution, overharvesting, habitat loss, and general misuse, those days are long over (at least until nonprofit org Massachusetts Oyster Project successfully restores oysters to Boston’s marine estuaries). We can take comfort, however, in knowing that other parts of Massachusetts, particularly the South Shore and Cape Cod, are producing plenty of beautifully briny oysters, both farmed and wild, that are readily available for consumption in the fine restaurants of Boston. Look for anything coming from the Cape (i.e., from Barnstable, Eastham, East Dennis, Cotuit, Wianno, ever-popular Wellfleet), Martha’s Vineyard, Cuttyhunk Island, and South Shore towns like Kingston, Plymouth Rock, and Duxbury.

Where: There’s a good reason why Island Creek Oyster Bar (500 Commonwealth Ave., map), celebrated for its fresh and largely ocean-to-table seafood, has a terrific raw bar: The restaurant is an extension of boutique oyster farm Island Creek Oysters, located in Duxbury Bay, some 40 miles south of Boston, and famed for being served at such estimable places as The French Laundry, Le Bernardin, and the White House. Bivalves are even part of the décor here: Oyster shells enclosed in wire cages fill an entire wall; a huge photo of Duxbury Bay’s tidal flats hangs on another. Even the restaurant’s fashionably rustic reclaimed-wood furniture somehow evokes an oyster farm.

Order: Sample from the restaurant’s generous raw bar menu, on which 12-18 varieties of oyster are designated not only by location but also by oysterman’s name. You’ll always find the excellent Island Creeks ($2.50 each)—deliciously salty and sweet, juicy and firm—and a good handful of other Massachusetts oysters; during our visit, this included Rocky Nooks from Kingston, Moon Shoals from Barnstable, and Peter’s Points from Onset. (A few West Coast options, such as Hog Islands from Tamales Bay, CA, and Hama Hamas from Lilliwaup, WA, are offered as well.) If raw’s not your thing, try the IC oysters fried into sliders on a brioche roll ($4). And it’s not just oysters from New England: The raw bar includes Maine lobster and Wellfleet littlenecks.

Good to know: Island Creek Oysters are able to be farmed year-round due to Duxbury Bay’s uncommonly cold waters.