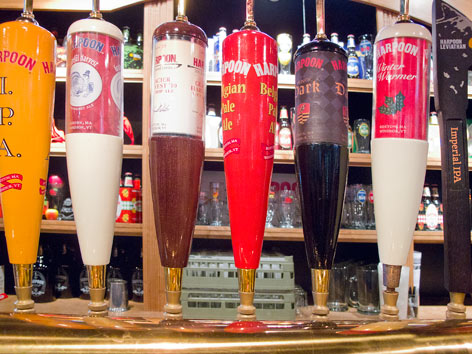 What: Beer’s been big in Boston since, well, the city’s existed—it was settled by the English, remember? But while the claim that the Pilgrims chose to land at Plymouth Rock in 1620 because of a shortage of beer on deck has been disputed, it is on record that the first pub was opened in the Massachusetts Bay Colony in 1634, followed by the first brewery in 1637—so it’s safe to say that beer’s been enjoyed here for nearly four centuries. Fast-forward through those dark days of Prohibition, and today the Boston area has a nicely varied craft beer scene. The big players are, of course, Samuel Adams (of the Boston Beer Company) and Harpoon—both in the top 10 of the U.S.’s largest craft breweries*, albeit with hundreds of thousands of barrels in production separating them—and among the handful of small-batch breweries in the area, we like the arty Pretty Things Beer & Ale Project as well as locally distributing microbrewery-brewpub Cambridge Brewing Co., both of which are based in neighboring Cambridge.

*The Boston Beer Company has taken a lot of flak about whether it qualifies as a craft brewer, since its distribution numbers for Sam Adams have crept closer (and now past) the two-million-barrels-a-year mark—the cutoff long established by the Brewers Association (BA) trade association, which defines craft brewers in terms of being small, independent, and traditional. However, much to the not-surprise of beer geeks everywhere, the BA voted to raise the cap to six million barrels in late 2010, thus allowing the BBC to maintain its craft cachet (and tax breaks)—and the BA to keep its craft brewing market-share statistics intact. But before you write off Sam Adams as too mass-market, remember that the brewery known for its ubiquitous Boston Lager and seasonal ales—and TV commercials featuring founder Jim Koch hand-selecting his Bavarian hops—remains highly creative and experimental, especially where its Barrel Room Collection (oak-barrel-aged) and other specialty beers (like the hop-tastic Imperial Pilsner and über-pricey, boozy, 16-year-aged Utopias) are concerned.

Where: We went to Harpoon Brewery (306 Northern Ave., map) for one of its free hour-long weekday tastings, in which small tastes are given of what’s on tap from Harpoon and UFO (Harpoon’s unfiltered beers)—about 8-10 beers—accompanied by narration about the company’s history and what you’re drinking. There’s a slight classroom vibe, but there’s also beer! Lots of it.

While Harpoon is most known for its classic IPA, malty Munich Dark, and crisp UFO Hefeweizen, the best part about visiting the brewery is getting to try the more experimental Leviathan (big beers/high ABV) and 100 Barrel Series (limited-edition, small-batch) brews, which change up frequently. (During our visit, the latter was the Glacier Harvest ’10 Wet Hop Ale, a robust locavore beer crafted from freshly picked “wet” hops from New York state and Maine-grown barley; most popular was the Island Creek Oyster Stout, made with the locally harvested oysters from Duxbury Bay.)

Good to know: Harpoon has a second production plant in Windsor, VT, but is headquartered and still brews beer at the Boston location.

Other Boston breweries and brewpubs: The other big guy in town—Boston Beer Company’s Samuel Adams (30 Germania St., map)—is also open for hour-long tours (Mon-Thurs, 10am-3pm; Fri, 10am-5:30pm; Sat, 10am-3pm; departing every 45 min; suggested donation: $2, for local charities). This is a test brewery, reserved for Sam Adams’ more experimental beers, like the Utopias; most of the regular stuff is brewed in Cincinnati and Lehigh, PA. The tours get very crowded, so arrive early or expect a wait (no reservations are taken).

The Cambridge-based, husband-and-wife team behind Pretty Things Beer & Ale Project doesn’t offer tours (the beer is brewed in Westport, MA), so you’ll have to find its whimsical artisanal beers—which combine Belgian or English tradition with American hops and creativity—elsewhere. And you should, because they tend to be excellent. Look for the flagship Saison-style Jack D’or or English brown ale Saint Botolph’s Town at the area bars and restaurants noted here.

The Cambridge Brewing Company (1 Kendall Square, Bldg 100, map) not only serves terrific food with a local bent, but it also brews a line of house and seasonal beers (which sometimes have a local bent as well: Last autumn’s Great Pumpkin Ale used local pumpkins; the springtime Valley Girl! session ale features Massachusetts-grown and -malted barley, the latter courtesy of Valley Malt.) Of the house beers, we particularly liked CBC’s toasty Charles River Porter and refreshing Tall Tall Pale Ale. Show up for $2 samples (we tried eight for $16), or find the beers at area bars and restaurants.

While in Boston, you might also swing by regional chain Boston Beer Works (multiple locations including 61 Brookline Ave., map)—especially if you’re a Red Sox fan, as its most iconic location is across from Fenway Park. The Bunker Hill Blueberry Ale, garnished with fresh Maine blueberries, is a crowd-pleaser, or skip the fruit and try the citrusy, hoppy Back Bay IPA. (Bonus: There’s a BBW location in Logan International Airport.) Another area chain is John Harvard’s Brew House (multiple locations including the original, 33 Dunster St., Cambridge, map), with a decent Nut Brown Ale and Dry Irish Stout among its house offerings. Finally, keep an eye out for Plymouth-based Mayflower Brewing Company (12 Resnik Rd., Plymouth, map); the brewery does tastings and tours, but in Boston, you can find it here. We kind of love Mayflower for its stated mission of “celebrating the legacy and history of the Pilgrims.” It always comes back to them, doesn’t it?

Boston beer bars: In Boston’s Chinatown/Theater District, we like the ancient Jacob Wirth Restaurant (31-37 Stuart St., map): Since 1868, its long mahogany bar has been a fine spot for a pint, even better now that it might be a Harpoon 100 Barrel Series or other regional brew. In Brookline, you’ll find a nice sampling of area craft beers at The Publick House (1648 Beacon St., map), often including some from CBC, Pretty Things, among other American crafts and a ton of Belgians. In Allston, try Deep Ellum (477 Cambridge St., map) or Sunset Grill & Tap (130 Brighton Ave., map), which boasts an incredible selection of local, U.S., and international beers, and offers flights like “Local Boston Shuttle” and “New England Happy Camper.”