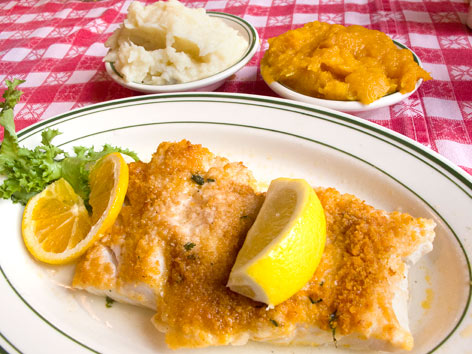 What: It’s a fish, but not the name of a species. Weird mystery whitefish? Not at all. Scrod, sometimes spelled “schrod,” is usually young cod or haddock; the etymology of its name is disputed but, according to Merriam-Webster, comes from the obsolete Dutch word schrood (“piece cut off”) or the Cornish word scrawed (past participle of scraw, to split, salt, and lightly dry). (Historians tend to dismiss theories that the name came from various acronyms like “Secured Catch Received on Dock.”) So “scrod” specifically refers to a young cod or haddock that’s been split and dried, or otherwise prepared for cooking. Most spots in Boston serving this nowadays prepare the fish breaded and baked or broiled, with lemon.

Where: Our scrod is from Durgin-Park, the historic Faneuil Hall Market restaurant that sadly closed in early 2019.

Order: The Boston “schrod” ($22.95), baked or broiled, which is breaded, buttery, and served with lemon and orange, plus potato and the vegetable of the day (sweet mashed butternut squash during our visit). The flaky fish is mild but nice; a squeeze of lemon and dash of salt did wonders for it. DP has a good selection of regional craft beers, including the John Durgin pale ale, brewed for the restaurant by Harpoon Brewery.

Alternatively: Unfortunately, the price of the simple scrod only goes up from Durgin-Park, as it’s most often served at old-school, tourist-driven places. Expect to pay $30 for the dish at Parker’s Restaurant, inside the Omni Parker House Hotel (60 School St., map), which has served it since 1906.

Please let us know in the comments if you know of any other Boston restaurant selling scrod!