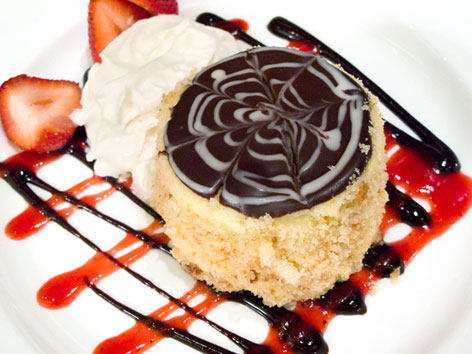 What: Simple yet decadent, Boston cream pie is actually a cake—a white sponge cake, to be exact, which is split and layered with thick pastry cream inside, then iced with chocolate ganache on top. It’s likely that the first versions of this cake were cooked in a pie tin, hence the name screw-up. The cake was invented by a French chef at the Parker House Hotel, shortly after it opened in 1855—and where it’s still served today.

Good to know: The BCP was named the official dessert of Massachusetts in 1996, beating out other candidates including Indian pudding.

Where: It’s a bit of a stuffy, overpriced location, but you can’t beat the original Boston cream pie at Parker’s Restaurant inside the (now named) Omni Parker House Hotel downtown (60 School St., map).

Order: The Boston cream pie ($8), which is available anytime the restaurant (or bar) is open, including at breakfast. It’s served here as a circular mini cake, on an eye-catching plate of chocolate and strawberry syrup, with whipped cream and strawberries. The cake itself is super moist and rather addicting. Note: Unless you’re set on trying the famed Parker House Rolls, we don’t particularly recommend eating an entire meal here—the jacked-up prices are clearly aimed at tourists—but it is nice to swing by for a sweet taste of history in opulent surrounds.

Alternatively: In a similarly elegant, club-like environment, the Oak Room steakhouse at the Fairmont Copley Plaza Hotel (138 St. James Ave., map) has a locally renowned slice of Boston cream pie. For something more low-key, you might try a bakery like Lyndell’s (multiple locations including 74 Prospect St., Cambridge, map), which offers a mini ($4) and full-size ($15) Boston cream pie and comes with its very own history—the bakery first opened in Somerville in 1887. Or, for a more modern take on this dessert, try a creamy, made-from-scratch BCP cupcake at the adorable Sweet Cupcakes (multiple locations including 49 Massachusetts Ave., map).