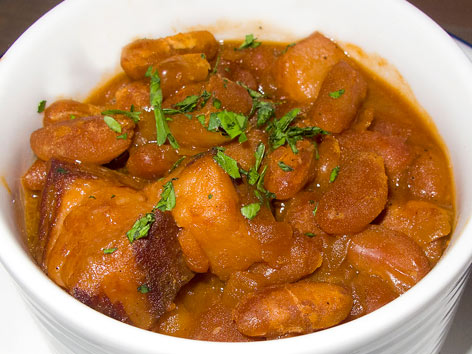 What: Why do you think it’s called Beantown? Slow-cooked beans have long been a tradition in Boston; the dish is said to have originated with the Native Americans, who baked navy beans with maple syrup, venison, and bear fat in pits dug into the ground. At some point, early English settlers started stewing the beans and substituting salt pork and molasses, the latter of which was plentiful at the time (due to the area’s role as a rum producer in a triangular trade with Caribbean sugar cane and West African slaves). Of course, nowadays baked beans are mostly associated with the canned-goods aisle of your local supermarket. But while it’s not easy to find a good homemade rendition in a Boston restaurant, it’s not impossible—and it is worthwhile.

Where: Since opening in late 2010, the Island Creek Oyster Bar (500 Commonwealth Ave., map) quickly made a name for itself for its excellent, fresh, largely locally sourced seafood. Surprise: It also serves a terrific side of baked beans.

Order: Go for the raw and cooked oysters, the local fish or fried clams, the Maine lobster roll, whatever—just get some “old-school baked beans” ($5) on the side. They’re made in-house the traditional way (a 10-hour process!), with salt pork, molasses, some chicken stock, and Dijon mustard, and they come to the table piping-hot, subtly sweet, and—our favorite part—dotted with delicious hunks of fatty pork. It’s the perfect stick-to-your-ribs comfort food to pair with that delicate seafood and good local beer.

Alternatively: Historic Durgin-Park in Faneuil Hall Market has sadly closed as of early 2019, but we do have access to its published recipe for baked beans, at least. If you have a tip on where to find real baked beans in Boston, please let us know in the comments!