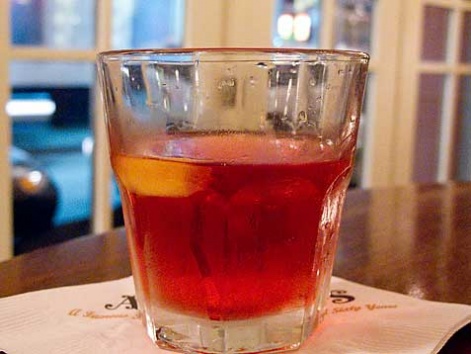 What: Dating to the 1800s, this signature NOLA cocktail—named for the French cognac Sazerac de Forge et Fils that was once its main ingredient, before cognac became too difficult to import—combines rye whiskey or bourbon with a little simple syrup and native Peychaud’s bitters (which gives it its bright pink hue) in a glass that’s been coated with Herbsaint, a local anise-flavored liquor and one-time absinthe substitute.

It is alleged that the inventor of the bitters, a pharmacist named Antoine Amédée Peychaud, created the Sazerac cocktail, or at least a precursor to it, when he began serving his friends a mix of brandy and bitters in an egg cup around 1838. (Many bartenders today also add in Angostura bitters.) A second story places a bartender named Sewell Taylor, who in 1850 was the sole importer of Sazerac cognac, at the center of the drink’s origins. Potent, old-fashioned, and absolutely essential, it is usually served straight up with a lemon twist.

Where: There are plenty of classic bars in which to drink a well-crafted Sazerac. We enjoyed ours at Hermes Bar (725 St. Louis St., map) at Antoine’s—it seemed fitting to sip a Sazerac in historic French Quarter surrounds, with tuxedoed bartenders who know their stuff. Bonus: There’s good live music here at times.

Order: A Sazerac. This is also a great spot to taste the original oysters Rockefeller and oysters Foch.

Alternatively: Other terrific bars for Sazeracs include the swanky Sazerac Bar (123 Baronne St., map) in the renovated Roosevelt Hotel, just outside the French Quarter; the cool Carousel Bar (214 Royale St., map) in the Quarter’s Hotel Monteleone, which features a slowly rotating carousel for a bar; and Arnaud’s French 75 (813 Bienville St., map) cigar bar, also in the French Quarter (P.S. try the namesake cocktail there, too). For a modern twist on this classic, head to music bar The Three Muses (536 Frenchmen St., map) in the Marigny for its Orange Blossom Sazerac, which incorporates vanilla-infused Sazerac rye whisky and housemade orange-fennel seed bitters.