Oysters on the half shell 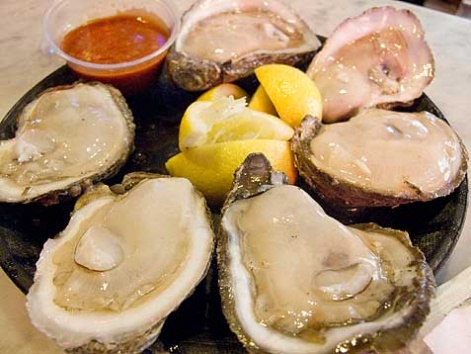 What: These aren’t, of course, unique to New Orleans, but oysters are so abundant along the Gulf coast during non-summer months that if you enjoy them raw, you should eat them as much as possible. With a cold beer, or three.

Where: The tourists are certainly on to it, but Acme Oyster House (724 Iberville St., map) in the French Quarter serves up fresh, plump raw oysters, with lemon and cocktail sauce, in a lively environment. Sit or stand at the bar and befriend your shuckers.

When: Sun-Thurs, 11am-10pm; Fri-Sat, 11am-11pm. Weekday afternoons are a good bet for avoiding the dreaded line here. Keep in mind that Gulf oysters are best eaten raw during the chillier “R” months; many people choose to avoid eating them raw at all between May and August. While they’re not necessarily terrible to eat raw during the summer, some taste will be sacrificed.

Good to know: Oyster shooters ($1.49) make a fun dare, but they’re kinda gross—that fine little oyster floats in vodka with a dash of hot sauce, and if you’re wondering about the vodka’s quality, remember how much it costs. Should you feel adventurous, go for it—just don’t say we didn’t warn you.

Alternatively: Any oyster-loving local will undoubtedly insist on his or her favorite spot, but in truth, good fresh oysters aren’t too hard to find in NOLA during the cooler months. Acme and Felix’s Restaurant & Oyster Bar (739 Iberville St., map), its across-the-street neighbor, are both conveniently located and great for raw and cooked oysters; Felix’s is less likely to have a line to get in. (There’s no reason to stand on that Acme line ever, really. Avoid it by going at an off hour or just go to Felix’s—same same.) If you can get out of the Quarter for your bivalve fix (and it’s not a Sunday, Monday, or June-August, when it closes), go to Casamento’s (4330 Magazine St., map) Uptown—many locals agree it’s the place for oysters. Order them raw and try a fried  “oyster loaf.”