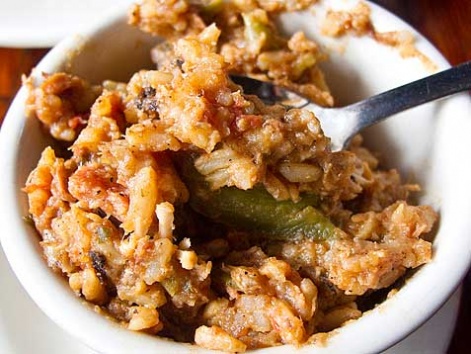 What: Simple and filling, taking cues from the French, African, and Spanish in its preparation (it’s likely related to paella, for one thing), this Louisiana classic is made with meats and/or seafood (often including andouille sausage either way), vegetables, stock, and rice—which traditionally cooks in the pot with the other ingredients to complete the dish (as opposed to dishes like gumbo, for instance, where the rice is cooked separately and served as more of a bed). For it to be “Creole” style, as it generally is in New Orleans, tomatoes are included; in Louisiana’s Cajun countryside, tomatoes are not used.

Good to know: No one can really say exactly how jambalaya came to be, other than that it is truly a mishmash reflective of the various cultures that settled in this part of Louisiana long ago. One theory says that jambalaya was born when Spanish settlers in New Orleans tried to make paella, substituting tomatoes for hard-to-find saffron; it later took on more French characteristics, such as the inclusion of andouille. There are also strong West African associations, specifically with similar one-pot dishes like joloff rice.

Where: The signature jambalaya at dive bar Coop’s Place (1109 Decatur St., map) in the French Quarter, made with boneless rabbit and andouille sausage with vegetables (tomato, onion, bell pepper), is excellent: thick, sweet, and spicy. Bonus: Coop’s serves food late (for the Quarter), and this dish makes an exceptional late-night alcohol absorber.

Order: The rabbit and sausage jambalaya (from $5.75 for a cup), or order it “Supreme” for the addition of shrimp, crawfish, and tasso, a spicy Cajun smoked ham.

Alternatively: Coop’s may very well have the best jambalaya in the French Quarter, but if you’re interested in trying another, there’s Napoleon House (500 Chartres St., map), Remoulade (309 Bourbon St., map), or K-Paul’s (416 Chartres St., map), where the dish includes tasso (and carries a heftier price tag). Nearby, in the CBD, informal Mother’s (401 Poydras St., map) also serves a good jambalaya.