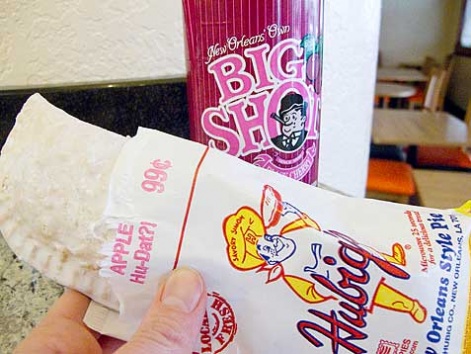 What: Nothing gourmet here, just three beloved grocery store items from the area: Hubig’s Pies, a family business in New Orleans since 1922, are little fried pies coated in a light icing that cost 99 cents apiece; they come in white waxy packages and have flavors such as lemon, apple, pineapple, and chocolate, plus seasonal varieties like strawberry, banana, and sweet potato (they do actually use local produce). Zapp’s are a brand of kettle-style potato chip from Gramercy, LA, that are popular in town (and beyond); they usually incorporate interesting spices and New Orleans-appropriate flavors, like Cajun Crawtator and Spicy Creole Tomato (we hear the Voodoo chips are something special). Big Shot—recognized for its fedora-wearing, cigar-smoking “Big Shot” character—is a soda company with flavors including grape, pineapple, strawberry, black cherry, and root beer. It’s been bought out by National Beverage Corporation, but is still most widely available in Louisiana.

Ed. note: In July 2012, the Hubig’s factory sadly burned down, and production has temporarily ceased on its pies in the meantime. The company hopes to be up and running again as soon as possible.

Where: Look for these items at any grocery store or gas station.

When: Anytime you want! Hubig’s packaging suggests you heat the pies up 25 seconds in the microwave before eating (we agree that’s a good idea). All three items travel well; take one of each home with you and support some local businesses.

Order: A matter of personal choice here. As far as Hubig’s pies go, the apple variety was pretty good, tasting a bit like what we remember McDonald’s apple pies tasting like (apologies to native New Orleanians!). For Zapp’s, we prefer the NOLA-esque flavors, like Spicy Creole Tomato. And for Big Shot, well, it’s all pretty sweet and sugary. We tried the black cherry.

Good to know: Vegetarians be warned, the fryers at Hubig’s factory use beef fat (as per the company’s tradition). Also, while you’re in the grocery store, remember to pick up some filé powder, spicy Creole mustard, and Louisiana hot sauce as culinary souvenirs.