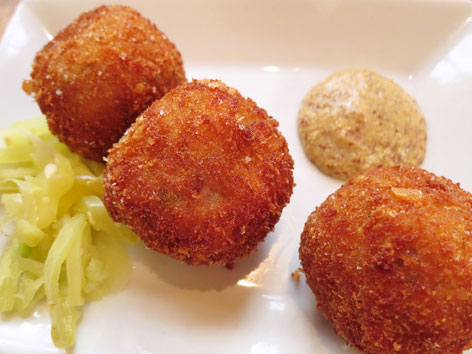 What: This beloved Cajun sausage, pronounced “BOO-dan”—a loose mix of ground pork, rice, onions, and seasonings wrapped in casing and steamed—has its roots in France, just like the Acadians (Cajuns) themselves. (Quick backstory: The French who settled in Acadia, today’s Nova Scotia, became known as Acadians; when the British unkindly kicked them out in 1755, many wound up, after years of hardship, in southern Louisiana.) But like other Cajun delicacies, boudin is now firmly a Louisiana thing, as food writer Calvin Trillin famously observed: “I figure that about 80 percent of the boudin purchased in Louisiana is consumed before the purchaser has left the parking lot, and most of the rest is polished off in the car. In other words, Cajun boudin not only doesn’t get outside the state; it usually doesn’t even get home.”

The pork in question traditionally includes lots of scraps (liver, heart, kidney, sometimes blood), reflecting the frugal tradition of boucherie, or whole-hog butchery (see also: cochon); rice was added as a filler along the way. Out in Cajun country the links are sold hot, freshly steamed and ready to be eaten on the spot (or, yes, in the car)—sometimes squeezed out of the casing, depending on its texture—while in NOLA, you’ll see it on a lot of Cajun-inflected menus, often as a standalone appetizer or in the form of boudin balls, for which the sausage filling is molded into a ball, breaded, and deep-fried.

Where: Boudin is a given on the menu at Cochon (930 Tchoupitoulas St., map), a popular Warehouse District restaurant from James Beard Award-winning chefs Donald Link and Stephen Stryjewski where modern presentations, old-world techniques, and Cajun traditions collide to great effect.

Order: The fried boudin with pickled peppers ($8), a fixture under the “boucherie” part of the menu, is a must-order here. The croquette-like orbs of sausage, crispy around the edges and moist and creamy inside, boast a rich unctuousness perfectly complemented by a dab of whole-grain mustard and (ideally) a local beer. Of course, the boudin is just the beginning here. We loved the namesake cochon, as well as the wood-fired oysters and Gulf fish “fisherman’s style.”

Alternatively: Next door at Cochon Butcher (930 Tchoupitoulas St., map) you can try real boudin—not that the deep-fried balls aren’t real or delicious, but they’re a little dumbed-down, you might say. It’s served hot and half in its casing, revealing the pink-and-white speckle of meat, rice, and seasonings inside. Historic Napoleon House (500 Chartres St., map) in the French Quarter also has boudin on the menu, as does popular brunch spot Atchafalaya (901 Louisiana Ave., map), in the Irish Channel neighborhood. For boudin balls and a whole lot of other meat dishes, swing by Toups’ Meatery (845 N. Carrollton Ave., map) in Mid-City. Of course, for the real real deal, you will have to get a car and head west toward towns like St. Martinville, Scott, and Lafayette, in the heart of Cajun Louisiana.