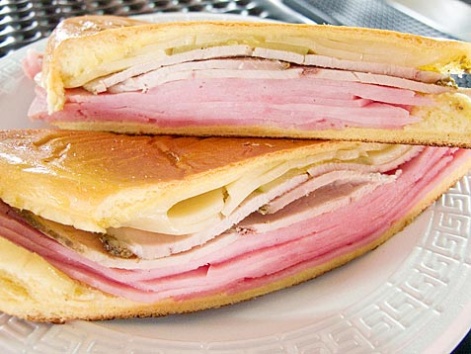 What: A small variation of the Cuban sandwich in which a sweeter, yellow-hued egg bread is substituted for Cuban bread. It is also generally buttered and pressed, with roasted pork, ham, Swiss cheese, and pickle inside. Medianoche means “midnight”; the sandwich is called so due to its alleged (onetime) popularity as a late-night, post-nightclub snack in Havana.

When: Mon-Sat, 8am-9pm; Sun, 8am-8pm. Despite the sandwich’s name and nighttime tradition, feel free to try one at any hour of the day.

Order: A medianoche ($4.25), with a fresh jugo for good measure. Also try the croquetas here.