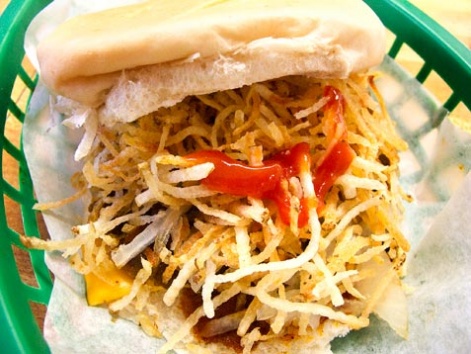 What: Fritas are Cuban hamburgers, which are infinitely more interesting than American ones because of the pile of crispy shoestring potatoes that gets stuffed between the beef patty (typically seasoned with cumin and paprika) and the Cuban bun. Diced onions and ketchup are also invited to the party. Cheese is optional, but definitely not needed (nor approved of by frita purists). Fritas cubanas came to Miami from Havana in 1962, and have grown in popularity ever since. Meet the "other" Cuban sandwich you absolutely cannot miss.

Where: At El Mago de las Fritas (5828 SW 8th St., map), a little old Cuban man—el mago, the magician—will methodically grill up your frita himself, adding a secret sauce that only increases the level of deliciousness. His frita is ridiculously good, with perfectly fried, crunchy julienned potatoes crowning the tasty patty. He also has the best business card around (ask for one). Bonus: Miami’s own Burger Beast has voted El Mago’s frita the city’s best.

Order: A plain frita ($3.50), and if it’s Saturday, try the fresh chicharrón  and a bowl of ajiaco, a hearty Cuban stew. Feeling less traditional? We haven’t tried it, but can safely assume the frita with a fried egg (“frita caballo”) is a smart choice. You can also get croquetas, batidos (milkshakes), and a darn good pan con bistec (steak sandwich) here.

Good to know: If you’re looking for the perfect Miami souvenir, El Mago de las Fritas is located just a few doors down from Ramon Puig’s La Casa de las Guayaberas (305-266-9683; 5840 SW 8th St.; map), the city’s premier seller of classic, crisp Cuban men’s shirts. Here, the loose-fitting button-downs come in all different colors, cotton or linen, long sleeves or short, with two pockets or four, hand-sewn here or imported from China (which explains why prices vary wildly, from about $20-$300). It’s the ideal uniform for your next cortadito.

Alternatively: Right down the street, El Rey de las Fritas (multiple locations including 1821 SW 8th St.; map) also gets a lot of frita love; it’s been around longer than El Mago (the owners of both were related and worked together at El Rey, until they went their separate ways 25 years ago) and has garnered praise from the Food Network. Hungry later-night revelers in Miami should check out the Twitter feed of the newer Frita Man (786-973-7975; location varies) mobile truck, which usually serves till about 10pm-11pm.