<< back to foods in Florida Keys 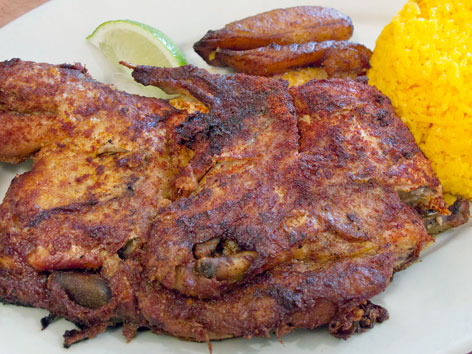 What: Florida’s historic ties to Cuba start with Key West, as there are just 94 miles between the two islands. Cuban fishermen populated the southernmost key in the late 1700s and refugees flocked there in the late 1800s to avoid Spanish rule in Cuba. While the cigar factories have long since moved up to Tampa and many immigrants settled in Miami, the Cuban presence is still alive and well in the Keys, particularly in Key West, which has had its fair share of Cuban mayors and in 2011 became one of the few U.S. cities permitted to allow direct charter flights to Havana (with restrictions, of course). What this means for the average visitor, aside from a healthy handful of cigar shops, is lots of good Cuban food: Cuban coffee, Cuban sandwiches, vaca frita, ropa vieja, roast pork and chicken; all the rice, beans, yuca, and plantains you could ever want. If you’ve been scarfing down a lot of seafood here, this is an ideal change of pace.

Where: We’d heard raves about Key West’s El Siboney Restaurant (900 Catherine St., map), a family-owned joint that’s been around since 1984, and the friendly staff, bustling atmosphere, and authentic eats lived up to its reputation. It’s located on a quiet street four blocks from crazy Duval, which qualifies it as off-the-beaten-path in this town.