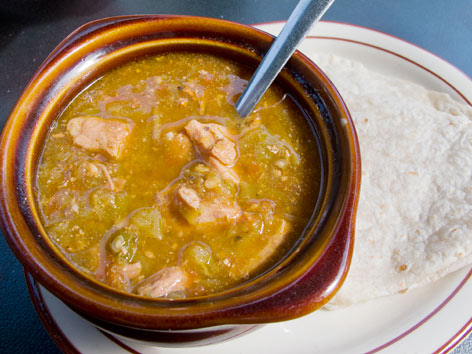 What: Southwestern cuisine is alive and well in Denver, and it’s perhaps best represented in the ubiquitous dish called green chili: a spicy stew-like mix of fresh roasted green chiles and usually pork, jalapeños, onions, and tomatoes (the inclusion of the latter is one of the key differences, we’re told, between Colorado- and New Mexico-style green chili). Recipes can vary wildly across the southwest, Colorado, and even within Denver, where you’ll find the dish served solo, in a bowl with flour tortillas on the side, or as a topping for burritos, enchiladas, egg dishes, fries, and more. The green chile in question might be the celebrated Hatch chile from New Mexico, the variety known as Anaheim or Big Jim, or those hailing from Pueblo, Colorado; many Denverites are known to buy them fresh-roasted by the bushel at farmers markets and roadside vendors when in season (generally September-October). But while you can find the chiles themselves enlivening burgers and beer around town, we are concerned here with the spicy, chunky, porky dish that’s a year-round local favorite.

A note about spelling: Some people insist the spelling of green chili the dish is “green chile”; we’ve seen it on Denver menus spelled both ways. For clarity purposes, we’re using “chili” for the dish and “chile” for the pepper itself.

Where: We got our “bowl of green” at the popular Cherry Cricket (2641 E. 2nd Ave., map), a divey restaurant and bar with a sprawling indoor-outdoor setup and a history that stretches back to 1945. Given its location in upscale Cherry Creek North, with neighbors like Betsey Johnson and Crate and Barrel, one local told us it was the “rough in the diamond.”

Order: A cup or bowl of green chili ($5/$7), which is served with one or two flour tortillas, respectively. Here, the chili has a dark green-brown roasty hue, is chunky with tender pork, and has a nice spice that doesn’t overpower, as it tends to at some other local establishments (and that’s coming from people who like their spice). You might also try a classic green-chili-smothered burrito here, or follow up your chili course with one of the Cricket’s award-winning burgers, which likewise make good use of green chiles. For drinks, look no further than the city’s strong microbrew scene: You’ll find selections from Denver’s own Wynkoop, Great Divide, and Breckenridge breweries among the Colorado drafts offered here.