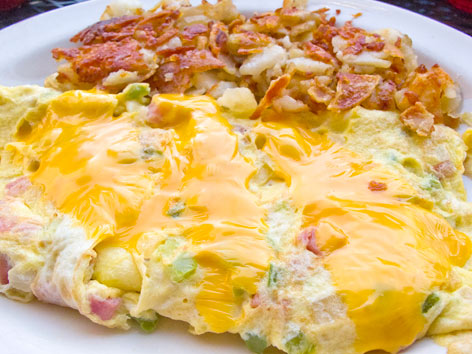 What: Eggs, diced ham, onion, bell pepper, and cheese form this omelet, which has murky origins despite being known all across the States today. Some historians speculate that the dish originated as a sandwich for cattle drivers, according to the Denver Westword, as it was composed of readily available ingredients (minus the cheese back then)—and probably was popular before the 1920s-1930s, when its various names first appeared in print. It’s also possible that Chinese railroad cooks created the dish as a sort of transportable egg foo yong. Since it was a “Western sandwich” first, it was always served on bread; several sources claim it was in Utah where the dish first became known as a Denver sandwich. At some point, the bread was dropped, and it became the Denver or Western omelet—as it remains today in diners all over the United States.

Note: We couldn’t find any places in Denver that still serve a Denver or Western sandwich. If you know of any, please tell us below!

Where: We got our classic Denver omelet at Sam’s No. 3 (multiple locations including 1500 Curtis St., map), a popular downtown breakfast spot with a long list of omelets and outdoor sidewalk seating.

Order: The Denver omelet ($8.99), prepared with diced ham, onion, bell pepper, and melty American cheese on top; it’s served with your choice of three mini pancakes, two pieces of French toast, two biscuits with gravy, or home fries with toast (the latter is the most traditional accompaniment). So basic, but yummy—you just can’t go wrong with salty ham and cheese in your eggs. To spice things up a bit, add a side or cup of Sam’s tasty “kickin’ green pork chili” ($2.29-$4.99); there’s also something called a Denver skillet ($9.99) on the menu: the usual Denver omelet ingredients cooked with a mess of home fries and green chili. Can’t be bad.

Alternatively: Another spot offering a classic Denver omelet is The Perfect Landing (7625 S. Peoria St., Englewood, map)—a bit further afield, about 30 minutes southeast of downtown in Englewood near Centennial airport (not Denver airport)—from which you can also watch private planes come and go.