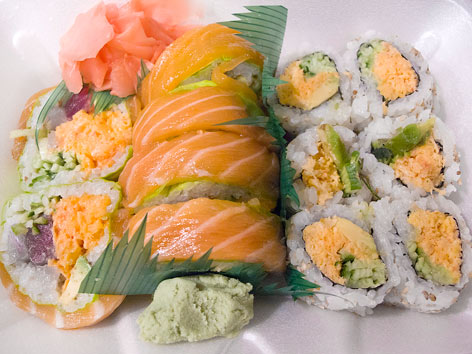 What: It is widely accepted that the California roll was invented in the 1970s at an L.A. restaurant called Tokyo Kaikan, by a sushi chef who either (a) wished to make Japanese maki sushi (rolls) more appealing to American palates—namely, by replacing the raw fish part with crab, cucumber, and avocado—or (b) ran out of toro, or fatty tuna, one day and substituted avocado, for its similarly creamy, oily texture. (Legend also has it the chef eventually chose to make the roll uramaki, or inside-out, because Americans preferred not to see the nori on the outside.) Perhaps it was a combination of both that led to the first California roll, but in any case, it was a runaway national hit and proved an ideal transition for many Americans into the world of proper sushidom—and for sushi chefs to let loose on creating more innovative nontraditional sushi rolls (with names like dragon, volcano, Philadelphia), which are still quite popular in Southern California and across the country. (As with the Korean taco, this and other “specialty” sushi rolls can be viewed as a natural mingling of cultures that, given the ingredients in this case, could perhaps be born only of SoCal.)

While many Americans now order albacore sashimi and uni (sea urchin) with the best of them, the California roll is still alive and well—and snooty sushi purists be damned, they’re still delicious. In Los Angeles., we also recommend you experiment with the always-creative maki rolls offered at any sushi joint, as they demonstrate the modern-day evolution of L.A.-born sushi innovation.

Where: There’s no shortage of sushi joints in this city, but we like nondescript yet always-hopping Sakura in Culver City (310-822-7790; 4545 S. Centinela Ave., map), where the California rolls use real, not imitation, crab. Though the long, moderately priced menu comprises hot and cold Japanese classics, the place is most celebrated for its sushi, sashimi, and specialty rolls.

Good to know: This place is popular, so expect a wait for a table—or take your order to go.

Order: The sesame-seed-dusted California roll ($7; pictured at top right), with soft, fresh crab meat, ensures you get a mouthful of crab with your creamy avocado and crunchy cucumber sticks; the giant house Sakura roll ($18; at top left) is for fish lovers only: Wrapped half in salmon and half in green soy paper, it’s fat with tuna, whitefish, langoustine, cucumber, and avocado. At Sakura, you might go big and bold with the whimsical Caterpillar roll—unagi (eel) and avocado—or stick to simplicity with delicate yellowtail sashimi and/or spicy tuna, toro, or langoustine sushi, among many others.

Alternatively: For good inventive sushi rolls—and variety to the tune of 50-plus specialty rolls—try Hamasaku in West L.A. (11043 Santa Monica Blvd., map), where many of the crazy-sounding concoctions are named for actors, directors, or other Hollywood fare (i.e, the Narnia Fantasy Roll: spicy yellowtail and crispy rice topped with avocado, chopped tuna, salmon, and yellowtail, plus daikon, sweet sauce, and spicy mayo). Prices hover around $20 a roll, though the California roll is a more modest $8. In Santa Monica, Ninjin (607 Colorado Ave., map) is likewise known for its sushi rolls, including the B.S.C.R.—baked scallop on California roll ($7.95)—and a host of tempura, baked, and even low-carb rolls. Of course, sushi traditionalists will be happier looking elsewhere, and thankfully this city is equally full of excellent sushi joints that are more Japan than L.A., such as the Michelin-starred Mori Sushi (11500 W. Pico Blvd., map) in Santa Monica.