Despite the smog, L.A. is an outdoors-lovers’ paradise. Surf, stroll, swim, and check out these other heart-pumping, taco-burning suggestions:

WHERE TO HIKE IN LA 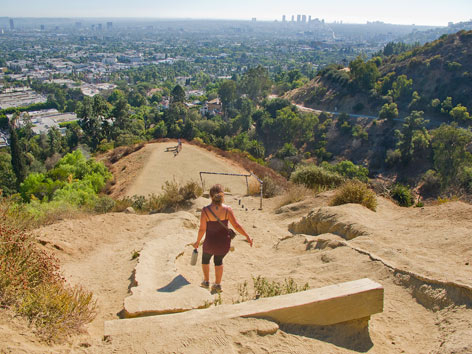 It’s hard to beat a short hike in 160-acre, dog-friendly Runyon Canyon Park (2000 N. Fuller Ave., map), with its convenient location just north of Hollywood and impressive views of the Hollywood Hills and downtown L.A. You can hike up to 3.5 miles here on a loop trail, partly paved and partly dirt, with a few steep, rugged sections. Warning: On weekends, it gets especially crowded with shirtless men, tiny dogs, and often a celeb or two.

Just east of Runyon Canyon, there’s much more space and nature within Griffith Park (4730 Crystal Springs Dr., map). Among the popular hikes on its 53-mile network of trails, fire roads, and bridle paths is the one leading from the Observatory parking lot to the summit of Mount Hollywood, the park’s highest peak, affording magnificent views of the L.A. Basin. Alternatively, this hike takes you up neighboring Mount Lee, right behind the famed Hollywood sign.

Looking for something less urban/more hardcore? Check out the master trail map at Modern Hiker, a terrific website with tons of info on L.A.-area hiking…including hikes further afield in the beautiful Santa Monica Mountains and San Gabriels.

Make like every L.A.-set movie or TV show you’ve even seen and join the buff hotties on Rollerblades, skateboards, and bicycles sweating along the paved beachfront path bordering the picturesque California coast between Santa Monica and Venice. It’s as Los Angeles as you can get. Rent bikes ($10 an hour; $30 per day) on the Santa Monica Pier at Blazing Saddles (320 Santa Monica Pier, map) or from one of Perry’s eight different rental locations along the bike path. Note: It can get quite crowded, so use caution and watch out for distracted beachgoers.

You can cover anywhere from three to eight miles one way between Santa Monica and Venice, depending on where you start and finish (for instance, it’s 3.5 miles from the SM Pier to the Venice Fishing Pier). For a longer oceanfront ride, start at Will Rogers State Park in Pacific Palisades, north of Santa Monica, and cycle down to Torrance County beach—past Marina Del Rey, Manhattan Beach, Hermosa, Redondo—to complete all 22 miles of the South Bay bike path (a.k.a. the Strand).

And for some Los Angeles history with your ride through this area, check out the 1.5-hour Legends Beach Bike Tour ($45 per person) offered by Perry’s.

WHERE TO WORK OUT

While in Venice, you might pay $10 for a day pass to Muscle Beach Venice, if you don’t mind beefy bodybuilders and ogling tourists. Less intimidating, perhaps, is the free bodyweight gym opposite, where you’re free to pull-up, dip, climb, and otherwise torture yourself to your heart’s content.