Pie and mash, with liquor 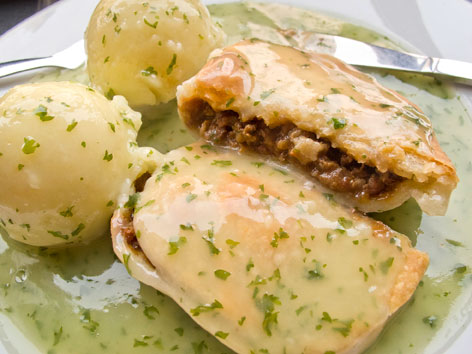 What: This traditional cockney comfort food, once a staple of London’s poor working class, is, simply, a minced-beef meat pie served with mashed potatoes and a thin green parsley sauce, called liquor—which, incidentally, contains no alcohol. The other item on the menu at your typical pie-and-mash shop? Jellied eels. (Someone in the 19th century decided they complement each other well, and who are we to argue? In fact, the liquor sauce that accompanies the pie and mash was traditionally made with the liquid left over from stewing or boiling eels.) Hearty, tasty, and dirt cheap, pie and mash is one of the few true London foods you can still find today, albeit in an ever-shrinking handful of old-school, cash-only shops with short, odd hours—and lunchtime lines of old-timers extending out the door.

Where: Dead smack in the middle of a trendsetting street, Clark’s (071-837-1974; 46 Exmouth Market, map) is a hard-to-miss relic of another era, where the news of the day still gets discussed over the glass counter. Established in 1910, it’s small and white-tiled inside, with wooden pew-like booths and tables.

Order: One pie and mash, with liquor (small/large, £3.50/£3.60), and you really should try those eels too. (They are quite good! Really.) The potatoes arrive in yellow balls—controversial for those who prefer their mash spread out and around their pies, all over the plate—but with a little spoon work, the pie and mash here are easily mixed into tasty, meaty submission. You may choose to enliven your plate with a little of the vinegar and white pepper provided, and wash things down with a refreshing cream soda.

Alternatively: Most of the old-timey pie-and-mash joins are clustered in the East End, as that’s where the working-class lived back then. In Bermondsey, try M. Manze (multiple locations including the original at 87 Tower Bridge Rd., map)—the oldest pie shop in London, dating to 1902—or up in Hackney, F. Cooke (9 Broadway Market, map) in Broadway Market; both the Manzes and the Cookes are surviving families of the good ol’ eel-pie-and-mash days of yore. 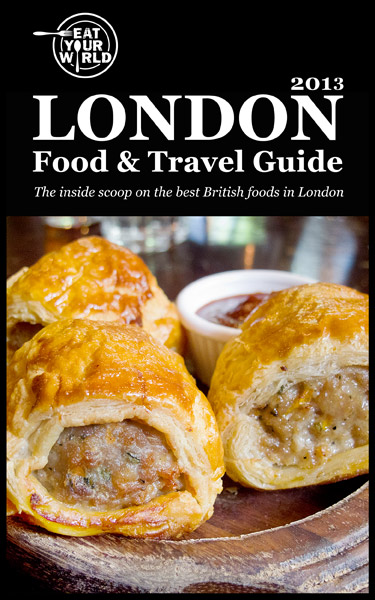