<< back to foods in Copenhagen 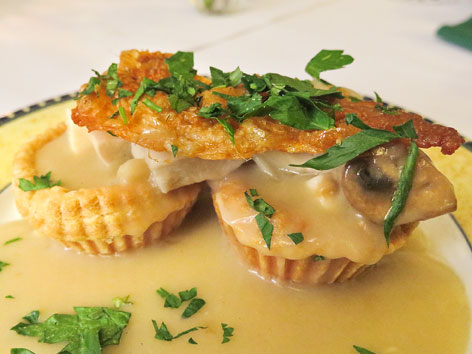 In its simplest form, tarteletter med hons i asparages (“tar-tey-letter”) is its translation: puff-pastry tart shells filled with chicken and (usually white) asparagus, typically with a white sauce made of butter, flour, and milk. “Patty shells,” as they’re often translated, have been eaten in Denmark for at least 150 years, and there are many different varieties, but this is among the most popular, and traditional, of fillings, first appearing in a Danish cookbook in 1901 and inspiring nostalgia in many a Dane.

What was everyday kind of fare in decades past has seemed to morph into special-occasion fare more commonly spotted at celebratory buffet lunches like that at Easter, at least for the younger generation. Thankfully, there’s at least one place in Copenhagen you can find tarteletter on the regular, and it’s delicious.

Where: Right off pretty Nyhavn’s picturesque canal-front strip, basement-level, 2000-established Told Og Snaps (Toldbodgade 2, map) is a traditional Danish-lunch cafe that seems older than its age. We mean that as a compliment, of course—Copenhagen’s old-school lunch spots are cool and classy, and Told Og Snaps is likewise. (It’s also friendly, something we found wasn’t always the case in the older restaurants.) It’s known for its from-scratch smørrebrød (open-faced sandwiches) and snaps, but it’s the only place we found with tarteletter on the menu.

Alternatively:  Old-school smørrebrød restaurant Schønnemann (lunch only; Hauser Plads 16-18, map) has a few varieties of tarteletter on its menu, although not this particular one. And also in tourist-friendly Nyhavn, right along the picturesque canal, Restaurant Heering (Nyhavn 15, map) offers a chicken-and-asparagus tartelet, too, as an appetizer at dinner.