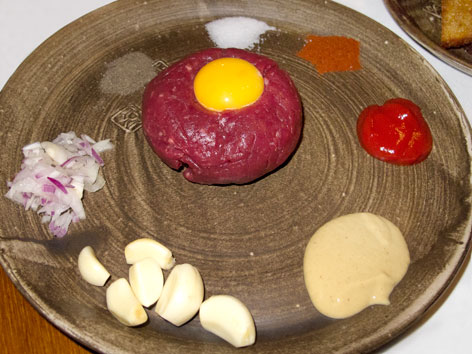 What: Here's a dish that takes its cues from the French steak tartare, but is 100 percent a Czech food favorite worth tracking down in Prague. Tatarák—technically short for tatarský biftek—is fresh, minced raw beef with a number of mix-ins: egg yolk, diced onion, mustard, salt, pepper, paprika, maybe some diced cucumber, and usually Worcestershire sauce or ketchup (unlike the French, you won’t find capers here).

Sometimes it’s served pre-mixed; other times you get all of its myriad ingredients fanned out around the plate, so you can mix it to taste (check out the tatarák video demonstration below). Served with some always-delicious topinky (fried toast) and garlic, this dish is absolutely divine with a mug of beer.

Note: Raw beef, of course, is not eaten without assuming some risk of bacterial contamination; however, if the beef is fresh, that risk is quite low. Stick to trusted restaurants—and you should probably avoid this dish if you have an already-weakened immune system. Ask a doc if you’re unsure.

Where: At the recommendation of local friends, we had this tatarák in the quiet “upper house” of U Pinkasů (Jungmannovo náměstí 16, Praha 1, map), a pivnice (pub) comprising three stories and five different eating/drinking areas. Like many spots in Prague, it’s celebrated for its beer: Allegedly the city’s oldest Pilsner Urqell pub (established 1843), it remains a beloved tankovna—pouring fresh, unpasteurized Pilsner from the tank—among both tourists and locals.

Order: There are a few good dishes hidden among the multipage, multilingual menus here, and tatarák (199 CZK) is definitely one of them. Half the fun is mixing everything up, of course, but spread the finished product onto some garlic-rubbed topinky and that’s a little bite of heaven.

You might follow this up with the delicious bramborové knedlíky, potato dumplings stuffed with smoked pork, served with white cabbage, fried onion, and gravy. Or, if you want a hunk of fried cheese, try the smažený sýr.

Alternatively: You’ll see this dish offered in many places, but again, when it comes to raw beef, it’s best to go somewhere based on a local’s recommendation. If all else fails, a steakhouse is probably a good bet; we heard it’s worth traveling for the tatarák at Restaurant Kabinet (Jana Želivského 10, Praha 3, map) in Žižkov, which sources its beef from South America.

If you don’t mind it pre-mixed, we loved the tatarák at Lokál (two locations including Dlouhá 33, Praha 1, map), made from Czech beef, served with topinky, and generally offered only at dinner.