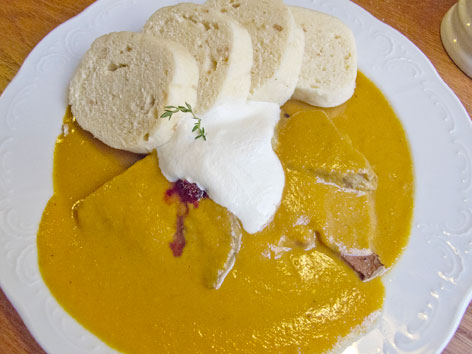 What: Some Czechs will tell you this is the only truly Czech dish—not borrowed or influenced by other Central European countries, but totally unique to the Czech Republic. For svíčková na smetaně, beef sirloin is paired with bread dumplings in a vegetable-laden gravy (typically made with herbs and root veggies like carrots, celeriac, parsley root) and topped with cranberry sauce (or jam), a slice of lemon, and cream. It sounds like a bizarre potpourri, but we were happily surprised by the taste: When made with quality ingredients, it’s a pleasing mix of creamy, sweet, tart, and meaty.

Where: We liked the version of this dish at Sokolovna (Slezská 22/821, Praha 2, map), a handsome pub inspired by Sokol, the Czech physical fitness movement/organization founded in Prague in 1862.

Order: The svíčková na smetaně (179 CZK) was quite good here, with a generous serving of tender Czech beef, tart cranberries, a dollop of cream, and a rich, sweet sauce redolent of carrots and other vegetables. Stirring the cream and cranberries into the sauce is a very good idea. The four bread dumplings, as usual, proved a perfect vessel for soaking it all up.

Alternatively: You might try this at any pub, though be warned the quality of the beef will vary wildly. Upscale pub chain Potrefená husa (multiple locations including the original at Vinohradská 104, Praha 3, map), owned by the Staropramen brewery, might be a good bet, or historic Café Louvre (Národní 22, Praha 1, map), whose clientele has famously included Franz Kafka and Albert Einstein. Or try the svíčková at Lokál (two locations including Dlouhá 33, Praha 1, map) when it's available; the restaurant is known for using quality ingredients in old Czech classics.