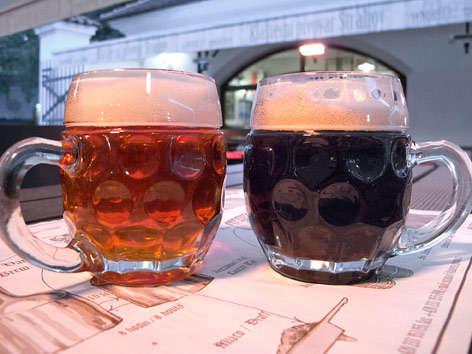 What: Pivo, or beer, and Prague are inseparable: Here is the capital of one of the world’s most famous traditional beer-producing (and beer-drinking) countries. The Czech Republic’s brewing history dates to 1082, though it wasn’t until 1842, when a certain bottom-fermented golden lager from the Bohemian city of Plzeň (Pilsen) was developed, that the country became known for its beer. Pilsner had been born. And since then, the Czechs have been known to consume more beer than any other country in the world.

Today pilsner is still everywhere. The most famous breweries are Plzeňský Prazdroj, part of the global-giant SABMiller Group—its portfolio includes Prazdroj (a.k.a. Pilsner Urquell), Gambrinus, Kozel, Radegast, Master, Primus, Klasik, and the nonalcoholic Birell—and Budvar, the last state-owned brewery and the original Budweiser (but not related to Anheuser-Busch’s; in fact the two continue to battle over legal rights to the name), from the Bohemian town of České Budějovice (a.k.a. Budweis). Neither are made in Prague (Plzeň is about 90 km away), but you’ll have no trouble finding their beers. These brewers are definitely macro, but a fresh, unpasteurized Prazdroj from the tank remains a must in Prague (see below, “Best places for pilsner”).

So what of the beers made in and around Prague? There’s Staropramen—another macro, owned by StarBev alongside Beck’s, Stella Artois, and others—and then there are lots of little brewpubs, plus a good handful of serious pubs carrying small, independent craft beers made around the Czech Republic. The latter two are the focus of this entry.

Where: Of all the brewpubs we tried, our favorite was Klášterní pivovar Strahov (Strahovské nádvoří 301, Praha 1, map), the brewery on the grounds of Strahov monastery, a short walk from the famous Prague Castle. Beer’s history is long and rich here—the monastery was founded in 1142; brewing began around the 13th or 14th century, ended in 1907, and returned to the complex in 2000, following a lengthy renovation. Given its history and location, this place can get quite touristy (and service can be quite poor), but the beer makes it worthwhile. There’s a smoky interior, a nice terrace (with heat lamps) outside, and usually about four house beers on tap, called St. Norbert after the onsite restaurant.

Order: Pictured is the St. Norbert IPA (37/64 CZK for small/large) and tmavé, or dark beer (35/59 CZK). The IPA is a break from the pilsner tradition, showing some experimentation on the part of the brewery. Clean and hoppy, with strong hints of grapefruit, it was deliciously refreshing. The more traditional dark beer was likewise exceptionally drinkable: rich, malty, and smooth. There’s always an amber available here too; sometimes you’ll see a wheat beer, a dunkler weizenbock, or another seasonal option.

Some other Prague brewpubs: Among Prague’s other popular brewpubs are the raucous, touristy but fun U Fleků (Křemencova 11, Praha 1, map), brewing for 500 years and serving just one house lager, the malty Flekovský ležák 13°—luckily, it’s a good one (see pic)—and U Medvídků (Na Perštýně 7, Praha 1, map), a hotel-restaurant-brewpub founded in 1466, though the brewpub part was just reborn in 2005 (Budvar from the tank is served downstairs—walk upstairs for the brewery; see also: Where to Stay). U Medvídků is renowned for its super strong, port-like X-Beer 33 (12.6% ABV), but also has a perfectly tasty unfiltered, unpasteurized semi-dark yeast beer called Oldgott, and we liked its seasonal plum lager, podzimní ležák, complex with dark fruit notes. Then there’s Pivovarský dům (Ječná/Lípová 15, Praha 2, map), established in 1998 and specializing in off-the-wall beer flavors like coffee, banana, and sour cherry (pic)—still, we much preferred its classic pilsner and dark lager above any others.

Best places for pilsner: All this talk of small-batch local beer does not mean you shouldn’t drink the big golden, hoppy pilsners. On the contrary! They remain indigenous to this region, tied to this land—it’s the water that makes them special, after all. The best spots in which to partake are tankovna, or tank pubs, those that use tanks rather than regular kegs, in order to preserve freshness and flavor—they’re the ones serving the real-deal unpasteurized beer.

Best beer bars: For something different—and certainly more variety in beer style—we encourage you to visit the city’s younger batch of Czech-craft-beer bars, which focus on pivo from microbreweries around the country. Among the best of these are Zlý časy (Čestmírova 5, Praha 4, map)—a local beer lover’s favorite that translates to “Bad Times,” averaging about 20 beers on tap exclusively from indie breweries, plus bottles—and the nonsmoking Pivovarský klub (Křižíkova 17, Praha 8, map), with about six Czech beers on tap and 240 or so in bottles, including some terrific imports.

It’s also worth swinging by the underrated Prague Beer Museum (Dlouhá 46, Praha 1, map), which is actually a pub with about 30 Czech beers on tap, many from smaller breweries—a great centrally located place to familiarize yourself with the country’s pivo via tastings (you can buy samples of five or 10 beers) or even beer cocktails, in the name of research, of course. At these craft-beer bars, look for offerings from craft breweries like Kocour, Matuška, and Žatec, all of which are located within 100 km of Prague.

Good to know: Want more? Whole books, like this one, have been written on the subject of beer in Prague.

So much beer, so little time! Tell us: What’s your favorite place to drink pivo in Prague?