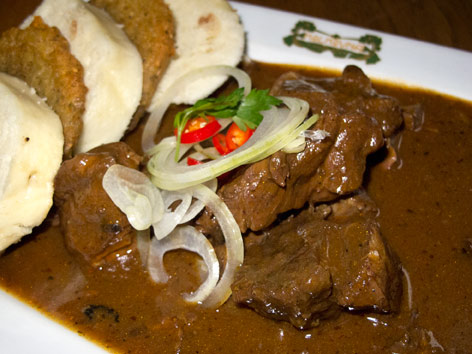 What: Guláš is goulash—a rich, slow-cooked meat-and-vegetable stew, seasoned primarily with sweet paprika, that's everywhere in Prague—and. with a nod to Hungary, where goulash is king, the Czech Republic (and Prague) is awash in the stuff (the two countries were once a part of the same empire, after all).

Czech goulash differs from Hungarian goulash, of course. It tends to be milder and beefier, with fewer vegetables than its Hungarian counterpart; it’s sometimes made with beer, and it’s always served with houskové knedlíky, the ubiquitous Czech bread dumplings, not noodles, potatoes, nor sour cream. And it’s not goulash soup—that’s also common around here, but it’s more a Hungarian thing. Goulash quality varies wildly by pub, but when you find a good one, there’s nothing better to pair with your pilsner. You really can't come to Prague without eating goulash at least once!

Where: Of the multitude of goulashes we tried, we preferred the one at Kolkovna (multiple locations including V Kolkovně 8, Praha 1, map), the original branch of a local Pilsner Urquell-affiliated chain that began here in 2001 with the goal of celebrating traditional Czech food. The Kolkovna restaurants are on the tourist radar (and have the slightly higher prices to prove it), but they do a good job with the food and beer, which is fresh, unpasteurized pilsner from the tank.

Order: The Plzeňský guláš (175 CZK) or Pilsen goulash, named for the town of Pilsen (not, according to our server, actually made with any pilsner). Here was delicious fork-tender beef and a rich, dark gravy, with a handy pile of raw onions and hot red peppers on top. Instead of the usual four bread dumplings, you get two plus two tasty bramboráčky (fried potato pancakes)—this is a nontraditional move, albeit one that offered a little variety, and we didn’t mind it at all.

Alternatively: Everyone seems to have his or her own favorite goulash in Prague, so it’s worthwhile to ask around. We also liked the version at the Staropramen-owned pub chain Potrefená husa (multiple locations including the original at Vinohradská 104, Praha 3, map), though it added more nontraditional elements (sliced scallions, grated horseradish, delicious karlovarské knedlíky, or Carlsbad-style bread dumplings; pic). Based on the quality of its goulash soup (pic) and svíčková na smetaně, we’d hazard a guess that Sokolovna (Slezská 22/821, Praha 2, map) makes a mean goulash too.