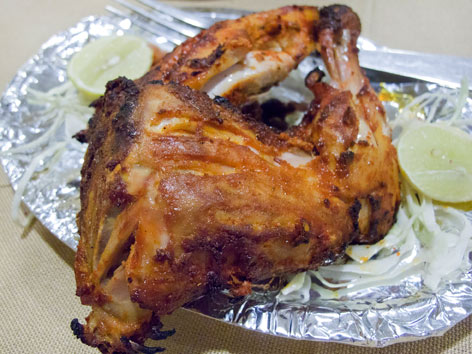 What: Popular across North India and well beyond, tandoori chicken is named for the cylindrical clay oven (tandoor) in which the bird is cooked. The generally accepted origin story attributes its invention to a Hindu Punjabi, Kundan Lal Gujral, who fled Pakistan following the 1947 partition and opened a still-existing restaurant in Delhi, Moti Mahal (see below), only to soon invent both tandoori and butter chicken. Of course, it’s hard to say for sure where the recipe might have come from, but it’s pretty safe to call this a typical Delhi food. The chicken is marinated in curd, thoroughly spiced to achieve its trademark scarlet hue, and cooked at a high temperature in the tandoor. Most often the meat’s served in pieces, on the bone. If it seems kind of boring because of its familiarity to many of us in the West, don’t be fooled: When it’s good and properly spicy, it’s blow-your-mind delicious.

Where: We found tremendous tandoori chicken at Pindi (2338-7932; 16, Pandara Rd. Market, map), one of several good (though not cheap) Punjabi restaurants on famed Pandara Road, just south of India Gate in central Delhi.

Order: The tandoori chicken (250/425 rupees for half/full order) is top-notch here: smoky, spicy, great-quality meat, and plenty of it (you’ll get two nice-size pieces in the half order). Finger-lickin’ good. Also on the menu is tasty butter chicken and good but pricey renditions of Punjabi-Mughlai classics like kadhai paneer, palak paneer, mutton korma, malai kofta, egg curry, and more.

Alternatively: If you can make it to the original Moti Mahal (3704, Netaji Subhash Marg, Daryaganj, map) in Old Delhi—it’s now a big chain of restaurants, presumably run by different descendants of the Gujral family, as the original claims it “has no branch”—you absolutely should. It’s an important piece of the puzzle that is this city’s culinary history.