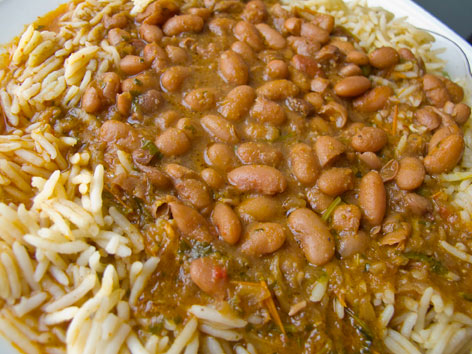 What: Red kidney beans, or rajma, are not native to India, but they show up in this common Punjabi dish paired with rice, or chawal. Soupy and hearty, it’s like a Latin American rice and beans, with Indian spices.

Where: Ours is from Baba Nagpal’s Corner (2642-8755; 7/25 Gupta Market, Lajpat Nagar-IV, Amar Colony, New Delhi, map), where we saw equal numbers of men breakfasting on this and the ever-popular chole bhature.

Order: One rajma rice (45 rupees), which is a huge plate of pea-flecked basmati rice with a soupy, mildly spicy kidney-bean sauce on top. The dish’s garnishes include pickled mango and a handful of raw onions and whole green chilies, the latter of which we picked out, to be safe. If you order it to go, as we did, you’ll get a nicely packed box of rice with the rajma in a separate plastic bag.

Alternatively: North of Old Delhi, near Delhi University’s north campus, Chache di Hatti (32, Bungalow Rd., Kamla Nagar, map), beloved by local college kids for its chole bhature, dishes out rajmal chawal (as well as chole chawal, or chickpeas with rice). You might also go looking for the well-known rajma chawal wala in Shankar Market near Connaught Place (map), who’s said to open around noon for a few hours to dispense the stuff of legend to the area’s shoppers and office workers.