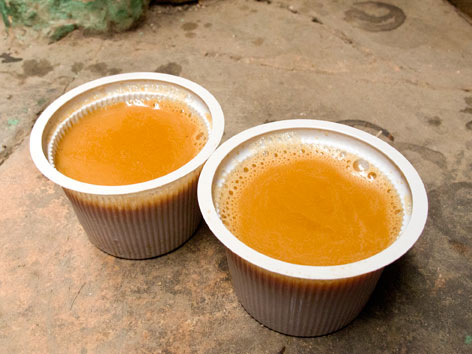 What: Masala chai is the milky spiced black tea that’s found all over India, thanks to the tea-crazy British, who set up plantations for export back in the 1830s and later worked to popularize tea drinking in India via the Indian Tea Association. Like much of north India and beyond, tea stalls or chai-wallas (tea makers) are common sights on the streets of Delhi, where they serve tea to passersby and local vendors. It’s an integral part of life here, especially in business matters: While shopping in the north, you might be asked to sit and have tea, which will be fetched from the nearest stall by a shop employee (or relative) and brought to you at no cost. Although “chai” generically means “tea” in much of India, what you get will likely be a tiny glass of the milky, spiced, sweet drink that’s more accurately called masala chai, in which water, black tea leaves (often Assam or Darjeeling), milk, sugar, and masala, or spices, are boiled together before straining. The pungency of the masala will vary by place, but usually the mix counts cardamom, cinnamon, and black pepper among its ingredients. Chai is generally pretty safe to drink, as the water is thoroughly boiled, although it’s not a bad idea to request a plastic cup in case of suspect glass-washing.

Where: Ours is from a teeny no-name Old Delhi tea stall on Kucha Pati Ram, on the same road as our favorite kulfi joint (approx. map). (To get there from the Chawri Bazaar metro station, find Sitaram Bazaar and take the second right onto Kucha Pati Ram, just past New Ashoka Sweets. The tea stall is on the right.)

Order: Tea (6 rupees), of course! The chai-walla boiled the water and tea leaves for a few minutes in front of us, and we watched him add the spices and milk over heat before straining the pot into plastic cups for us. The masala was mild, but tasty. The best part for us was the brief foray into Delhi street life: the watching and waiting, standing around to let it cool, chatting with other customers and the guys in the barbershop across the street. There’s certainly no lack of stimuli in these parts!

Alternatively: You can always try masala chai at your hotel or a regular restaurant/café, like the Oxford Bookstore’s Cha Bar (New Statesman House, Barakhamba Rd., map), a serious tea-drinkers’ haven in Connaught Place. For a good street experience, wander around a neighborhood like Old Delhi or Paharganj and look for a busy stall. For more tea-drinking around Delhi, see Afternoon tea, Indian tea.