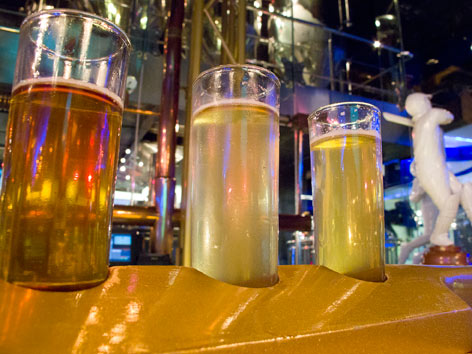 What: India’s not exactly a drinking culture—aside from religious restrictions, the legal drinking age is technically 25 and the obscene taxes on alcohol bills (20% VAT, 3% service tax) all but discourage public drinking. A handful of cities do have breweries, but Delhi isn’t much of a player among them. The last few years, however, have seen a small number of brewpubs pop up in the area, providing a very welcome, freshly brewed alternative to your bottle of Kingfisher. They’re mostly clustered in Gurgaon, a.k.a. the Millenium City, a rapidly growing shopping-mall-filled city about 20 miles south of Delhi that’s best known for being the Indian base of many a multinational company.

Where: We found the beer quite decent at cricket-themed bar Howzatt, inside the Hotel Galaxy (NH-8, Sector 15, Part II, Gurgaon, map), a fancy hotel-mall hybrid at the 32nd milestone on Gurgaon’s main road that claims to have been India’s first brewpub when it opened in 2008. An odd mix of sports pub and lounge, the darkly lit bar features cricket décor, a huge TV screen, and “retro” ’90s American music. Most ingredients for the beer are imported from Europe, but all the brewing takes places on site.

Order: Small samplers of the bar’s three basic brews are free. Although the tasteless Googly, billed as a wheat beer, is best avoided by beer drinkers, we liked Doosra, a light but tasty premium lager, and the dark and roasty Bouncer (big 550 ml mugs, 185 rupees; giant 1100 ml mugs, 310; pitchers, 435). The selection of beer cocktails is pretty good too; “Bowled Out,” for example, is akin to a Mexican michelada, but with Indian spices. For an ideal beer snack, try the masala peanuts, a generous portion of spicy nuts, onion, tomato, coriander, lime, and plenty of masala, or spices. Remember that all prices are before VAT and service charges (and service taxes on the service charge).