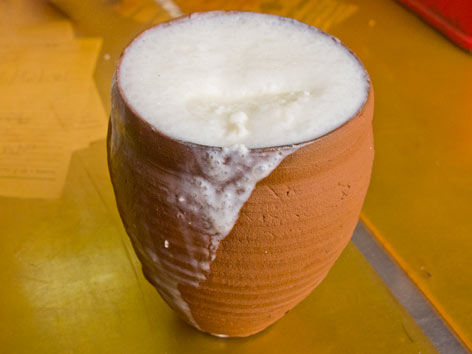 What: The smoothie-like counter to all those heavy curries, lassi is a creamy, frothy yogurt-based drink from Punjab. There are many varieties, but most will fall under either sweet or salted—the former is curd blended or whisked with sugar (and/or fruit), the latter with salt and often other spices, like cumin and/or cardamom seeds. Traditionally, lassi is served in a disposable clay cup called a kulhar, and extra malai, or clotted cream, is spooned on top before serving. In Delhi lassis are especially popular in the summer, when they provide a cool, soothing balance to most everything else being consumed.

Good to know: While this drink’s probiotic qualities are wonderful for all stomachs, it’s a good idea for foreigners to order it without ice, to be safe. Also, it’s best drunk in warmer months, as the curd is likely to be fresher. As for concerns as to whether water is added to lassis: It seems to depend on the place, and it doesn’t hurt to ask. Like with anything else here, start out slow—try a lassi or two at your hotel, for example, or a hygienic chain like Haldiram’s (see below)—before branching out to, say, an Old Delhi lassi-walla. We tried a wide range of lassis without problems, but experiences can certainly vary.

Where: We drank a lassi nearly every day during summer in Delhi, but especially loved the traditional one at Shyam Sweets (2326-8087; 112, Chawri Bazaar, map) in Old Delhi.

Order: One kulhar of lassi (30 rupees), which comes topped with malai and is nearly a meal in itself! The bedmi-aloo and nagori-halwa are also quite good here, and distinctly Delhi.

Alternatively: There’s always Haldiram’s (multiple branches including 1454/2, Chandni Chowk, Old Delhi, map) for hygienic everything, including lassis. But for more of the real deal, check out these two popular, well-known spots in Old Delhi: century-old Meghraj for plain lassis and Amritsari for flavored lassis (including mango, banana, rose, saffron, almond). Both are located on Fatehpuri Chowk, near Fatehpuri Masjid (map).