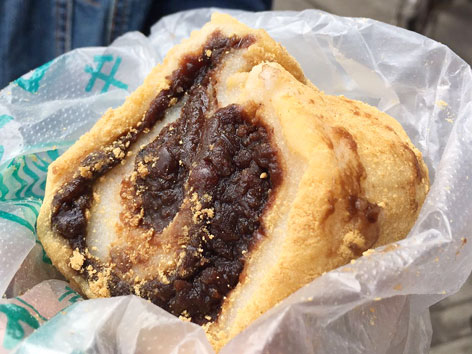 What: Sweet rice cakes are a popular snack throughout China, but two are particularly close to Beijingers’ heart. First up is ludagun (驴打滚), or “rolling donkey.” Now, the colorful names Beijingers give to their favorite dishes and snacks (“meat dragon” or “exploding stomach,” anyone?) are one of our favorite things about exploring Beijing’s food scene, and this dish may have the best name of all. But there’s nothing donkey-like about it, we assure you. Ludagun is just a sticky rice cake with sweet red bean filling and sugar-like soybean flour on the outside. Apparently, to its Qing dynasty creators this sweet snack’s powdery coating resembled how a donkey might look after a good tussle in the dirt.

A second popular local rice cake pastry is aiwowo (艾窝窝). The meaning of its name has been lost to history, but it’s said to come from the language of the Muslim Uighur people in China’s far northwest. Steamed like a dumpling, it’s filled with crushed walnuts and sesame on the inside, with a delicate dusting of powdered sugar on the outside, and crowned with a fruity slice of hawthorn on top.

While some outsiders may find ludagun’s red bean filling a bit blander than the stuffed sweets they’re used to, sinking your teeth into a chewy, gloopy slice feels like a guilty pleasure. And it’s almost impossible not to fall in love with aiwowo, with its sweet and subtle mix of flavors.

Where: The ludagun pictured is from Bai Ji (白记), inside the Niu Jie Muslim Supermarket (Niu Jie Qingzhen Chaoshi, 牛街清真超市, 5 Niu Jie, 牛街5号, map). Just look for the long lines queuing up outside the window, where trays of all sorts of freshly made traditional sweets are for sale.

Order: Customers buy their ludagun by weight here, at 13.8 RMB per jin (500 kg). You can watch as the bakers wield their cleavers, lopping off chunks of the popular rice pastry and deftly flipping it into plastic bags to take away. Order 5 RMB worth, and it should be more than enough for two people. You can also pick up aiwowo here for 2 RMB each.

Alternatively: Making the foodie pilgrimage to Niu Jie takes commitment, especially on busy weekends. For something a bit closer to the city center, Huguosi Xiaochi (护国寺小吃, 214 Dongsi Bei Dajie 东四北大街214号, map) is your best bet for ludagun, aiwowo, and other classic Beijing treats.