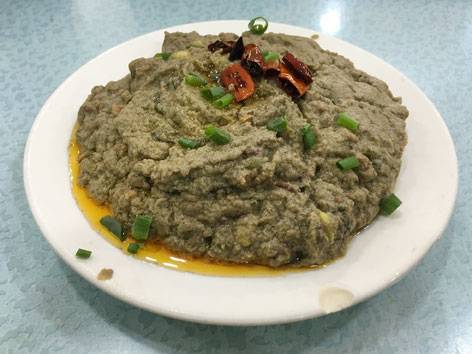 What: Bear with us for this one: Yes, madoufu may look like a pile of slightly green cement. Yes, we know that madoufu comes from the mashed and fried fermented mung-bean dregs left over from making douzhi. But take a deep breath, take a bite (we won’t blame you if you close your eyes), and you’ll be glad you did. Despite its unappealing first impression, madoufu is basically Beijing hummus, and it’s just as addictive as its distant Middle Eastern cousin. While it’s gone through the same fermenting process as douzhi, it has only a touch of douzhi’s sourness and none of its off-putting smell. Instead, madoufu carries hints of a flavor that reminds us of olive oil, with a little kick from the chili peppers sprinkled on top. Vegetarians be warned: Madoufu is typically fried in animal fat (typically lamb fat in halal restaurants, pork fat in others).

It’s usually served hot, but Chinese traditional medicine considers it a “cooling” food, making it a popular dish in the sweltering summer months. Many locals also claim madoufu is a surefire way to sober up after a long night of drinking.

Where: Our madoufu is from Bai Kui (白魁, 158 Jiaodaokou Nan Dajie, 交道口南大街158号, map), a casual eatery a few blocks away from the ancient Drum Tower. The Arabic calligraphy above the door is a reminder once again that while not all of Beijing’s traditional dishes originated from the Muslim Hui people, their community has done a formidable job of keeping the city’s culinary history alive.

Order: A plate of madoufu costs 15 RMB here. No matter how stellar your chopsticks skills may be, we think you’re better off going at it with a spoon—that’s what the locals do, after all. Madoufu isn’t a standalone meal, but makes a good accompaniment to a well-rounded lunch or dinner. We’d suggest something a bit lighter, like a plate of stir-fried spinach (qing chao bo cai, 清炒菠菜), as well as a plate of Bai Kui’s signature beef-stuffed “doornail dumplings” (men ding rou bing, 门钉肉饼).