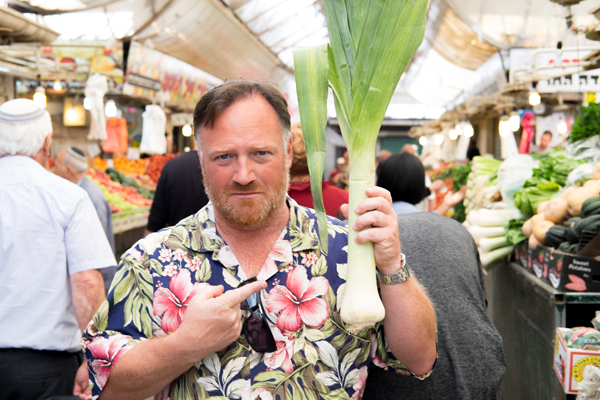 All photos courtesy of Naomi Tomky

“[Jerusalem’s Machane Yehuda Market] is not just about the fresh food. It is also a window onto this city’s culture and personality.” —Joel Haber, culinary tour guide in Israel

Joel Haber, also known as “Fun Joel” (and he does live up to that moniker), offers custom tours of all aspects of Israel, but he specializes in our favorite part: Jerusalem’s central market, called Machane Yehuda—or simply, “the Shuk.” When Haber walks the market, greetings come from every direction—vendors and visitors alike, as if he were a popular politician strolling the streets. His vast knowledge of local produce (and their exact season), delicacies, and history, combine with his entertaining style and strong relationships to provide a unique, informative, and extraordinarily tasty experience.

But until you can get to Israel and sample the charms and chow of the market yourself, we asked Haber to tell us a little bit more about the food and culture you’ll find at Machane Yehuda, and all over Israel.

How do you define Israeli food?
To me, Israel's food (and the food of Jerusalem especially) is a true melting-pot cuisine. While we may not have as many cultures represented here as a place like New York does, we still have people of many international origins living side by side. And since this place is so much smaller, those people often married each other, and their food literally blended together. Thus, while you may be able to find more distinct cuisines in a place like New York, the city is more of a culinary patchwork quilt, while our country's cuisine is truly a melting pot. What in other cosmopolitan cities might be seen as "exotic foods," here is simply "food." No one thinks about going out for a particular cuisine; we think of it all as simply our food. Layer all of that against the healthy, veggie, and legume-heavy Mediterranean diet, and you've got Israel's unique culinary culture.

What do you think most people get wrong about Israeli food?
What people most get wrong about our cuisine is not recognizing that very diversity. They think that all of our food is generic Middle Eastern, the same as you'd find in any Arabic country. In fact, our country is a place where the foods of Yemen, Kurdistan, Ethiopia, France, and America can peacefully coexist on our daily plates.

What is the importance of the Machane Yehuda Market in Jerusalem's daily life?
Machane Yehuda Market is the beating heart of the city. While it is no longer the only food market in town, it remains the central market that draws shoppers from every segment of Jerusalem's population. It has gone through many changes over the past 140 or so years, but I believe it will always remain a fresh food market at its core. And the various changes that have taken place in this city over that time have each been reflected in changes in the market itself. So it is not just about the fresh food. It is also a window onto this city's culture and personality. 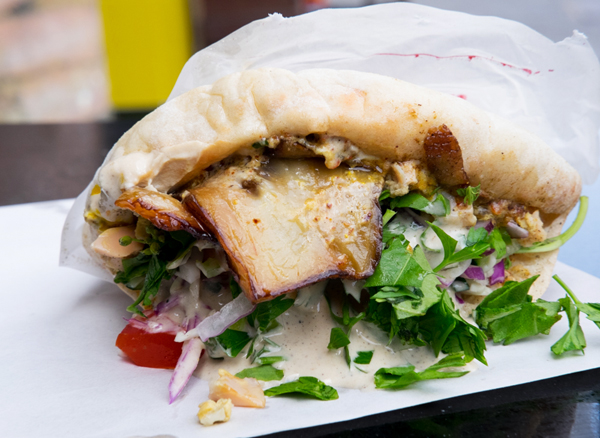 What about Israeli cuisine or food culture is the most fun or surprising to share with visitors?
Easily, the names of the food. I sometimes think tourists enjoy saying shakshuka [skillet eggs], chummus, and sabich [eggplant sandwich] even more than they enjoy eating these yummy foods! But beyond that, I think most tourists are impressed by how fresh and delicious our produce is. We grow about 95% of the fruits and vegetables that we consume here, which makes it healthier and tastier. One of my favorite comments from a tourist I guided was, "Wow, this tomato tastes like...a tomato!"

What's next for Israeli cuisine?
Hard to say, but one thing that will definitely have an impact is new immigrant groups. For example, there has been a large wave of French immigration recently (though there were many French people here already), and we've seen the impact on our food. Better-quality baked goods, for example. Continued immigration from Latin America has created a slight uptick in the number of eateries specializing in that cuisine. It will be interesting to see if that trend continues.

On EYW, we ask users to share short food memories related to travel, a favorite meal, growing up—anything. Can you share your favorite food memory with our readers?
That's also a tough one. But I think it might be a dinner I had with about seven or eight other guy friends, back when I lived in Manhattan. We went out to a kosher restaurant called Levana's, not for any specific occasion. We just wanted to have a really nice meal together. We spent a lot of money, but got a lot of delicious food that we shared between us. And if I remember correctly, that night we ate somewhere in the neighborhood of six different kinds of meat, three different kinds of poultry, and two kinds of fish. It was truly heavenly and a night to remember!

Learn more about Joel’s custom tours in Israel (in Jerusalem, Tel Aviv, and beyond).

About the author: Naomi Tomky uses her unrelentingly enthusiasm as an eater, photographer, and writer to propel herself around the world. From trailing a street food hawker in Singapore to navigating the ancient roads of the Mayan jungle, she explores the world with a hungry eye—and mouth. Follow her on Twitter @gastrognome and on Instagram @the_gastrognome.