On a Quest for Meatballs, in Malmö, Sweden

A day trip to Malmö had us wondering: Where are the Swedish meatballs? 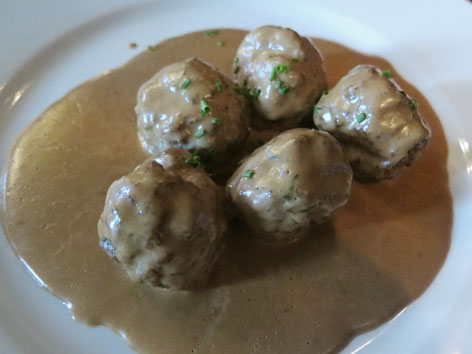 Sometimes you have only a few short hours in a new place, and damn it if you won’t make the most of them. Such was the case for our day trip from Copenhagen to Malmö, Sweden, just over the huge Øresund bridge from the Danish capital, where our brief agenda included wandering the streets, stopping in some parks, and eating köttbullar, or what we call Swedish meatballs. Pretty manageable, right?

That’s what we thought, anyway, as we emerged from the train into the bright sunlight last September. Our 17-month-old son was peacefully asleep in a carrier on my chest, and we had plentiful time to wander the quiet, pretty streets and find us some meatballs for lunch. We quickly saw, though, that Malmö is full of international food options—Swedish, not so much. In Lilla Torg, a pretty little public square not far from the train station, we found a sushi joint, a Scottish bar, some nightclubs, and a T.G.I. Friday’s. We walked on, and on and on, but the streets grew increasingly deserted of people, with nary a restaurant to be found. 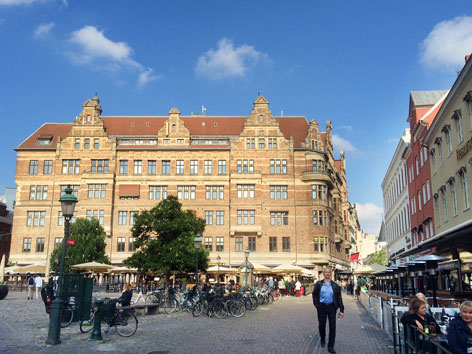 Lilla Torg, aka. a no-go zone for Swedish food

We began asking around. Where can we find some meatballs—or any Swedish food—in this town?

The host at T.G.I. Friday’s said we’d probably have to go to the international market, about a half-hour’s walk away.

A shopkeeper told us, completely straight-faced, that we should go to the nearest IKEA.

We were discouraged, but I didn’t buy it. I knew meatballs were one of those dishes more popularly eaten by Swedes at home, but I also knew some restaurants offered it too. Even in Malmö.

Finally we stumbled upon La Empanada, an inexpensive Tex-Mex lunch counter I’d read about that actually did have Swedish meatballs listed among its mostly fried, fast-food delights—tempting, but not the meatball experience we’d hoped for. This was a solid Plan B, at least. Feet aching and stomachs rumbling, we pushed on. 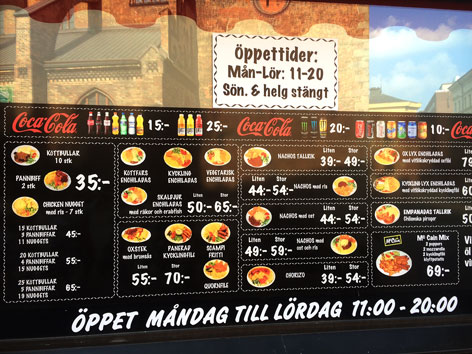 It occurred to us that perhaps we weren’t asking the right people. We tried a hotel, asking after a particular restaurant called Bullen, a traditional Swedish restaurant I’d come across in my hasty research. Lo and behold, a helpful person! The front-desk woman knew the place and was excited, even, that we were seeking it out. Armed with directions, we found it was just an eight-minute walk away, but in a part of town that might as well have been another world to us: bustling with people, shops, and eateries situated along a canal. How did we miss this? [Cue slapping the forehead for not getting a proper map of the town.] 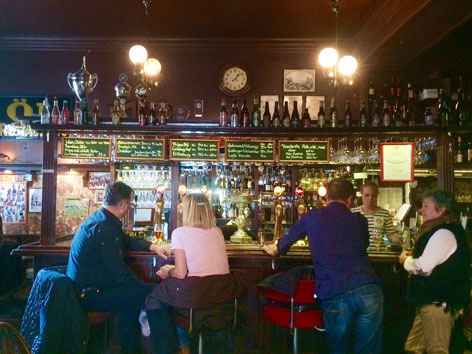 The inviting bar at Bullen

Here we found our Bullen (Storgatan 35, map), and it did not disappoint, from its cozy, dark-wood-paneled, old-timey interior to its menu, from which we chose meatballs and a traditional fried pork dish (stekt fläsk). Our son was still asleep, miraculously, as we toasted ourselves with glasses of refreshing Eriksberg beer, but his timing for food is impeccable, and he awoke hungry just as our plates arrived. Both dishes were beautifully presented and absolutely delicious. 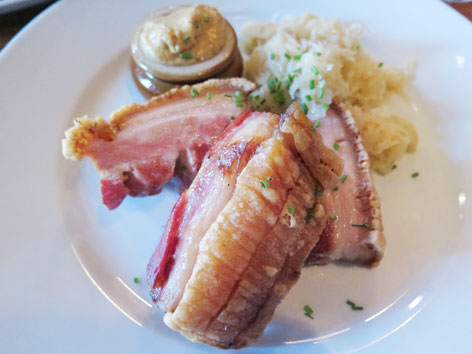 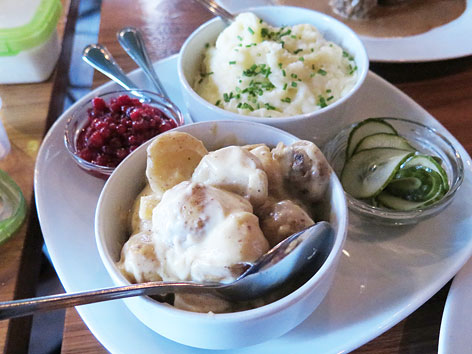 The tender veal meatballs (pictured at top), doused in a savory “whiskey cream” gravy, came with the classic pairings of mashed potatoes, sweetly tart lingonberries, and pickled cucumbers; the pork dish, which translated to “fried bacon with onion sauce,” was, not surprisingly, to die for: big hunks of meat with crispy skins and tender undersides, a pile of sauerkraut to cut through the richness, boiled potatoes. Perfectly satisfying.

Following this meat-and-potato fest, we needed that park. Fortunately, those are not hard to come by in this part of the world, and we wandered and kicked leaves and collected fallen chestnuts in leafy Kungsparken for a long while, till it was time to make our way back to the train station. Agenda met. Malmö, you did us right. 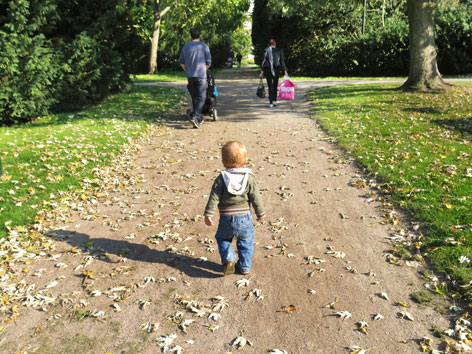