On Antigua, knowledge is power when seeking island cuisine, as the tourism industry and an apparent weekends-only policy conspire to keep some local dishes just out of reach. 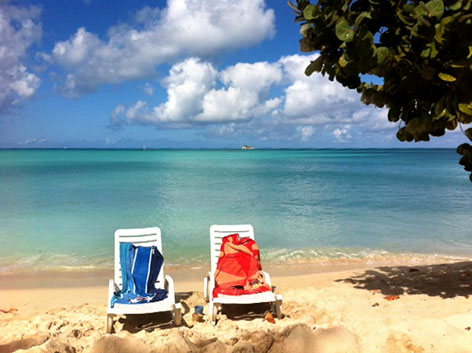 On the Caribbean island of Antigua last weekend, our local-food queries were most frequently greeted with:

“You have to go to someone’s home. Or to the little spots in St. John’s.”

It’s true we hadn’t done our own usual research. This trip, a long weekend ensconced in a quiet beachfront apartment on Antigua’s northwest shore, was a “babymoon” of sorts—that final relaxing trip before the new addition arrives, in just over two months for us. We weren’t planning on working, really. But we had to eat, and we wanted to eat local, not at the overpriced (and underwhelming) Italian restaurant next door.

We arrived on a Friday, and at first it seemed all of the beach cafes near us had something local to offer—conch chowder (delicious), garlicky local cockles (pricey), curried Antiguan lobster (pricier). The first restaurant we landed at, a waterfront spot called Miller’s, offered  a “local breakfast” on Saturdays; when we returned there the next morning, we were pleasantly surprised by what we found: a tasty array of salty, sautéed ling fish; chop-up (a vegetal mix of okra, spinach, eggplant, and pumpkin); fungee, a cornmeal polenta of sorts; and johnny cakes (fritters); plus avocado and a hard-boiled egg. Later that same day we wandered off the beach into Russell’s, whose chalkboard menu announced such Saturday specials as conch water, souse (a pig trotter soup), saltfish cakes, and Creole snapper. Local food heaven, but we weren’t yet hungry again, so we limited ourselves to a few small tastes and some old-fashioned rum punch (for Scott). Clearly Antiguan dishes weren’t too hard to track down around here.

Well, that was Saturday. 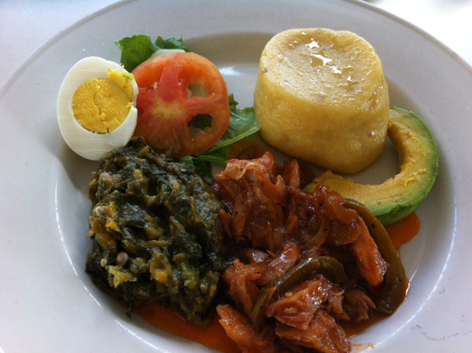 By Sunday there were still stewed meats around—a common thing to eat here—but none of the more exotic dishes we’d by now heard about and begun to covet. Goat water, everybody’s favorite stew. Ducana, a dense steamed sweet potato dumpling of sorts. Pepperpot, a meat and veggie medley. One couple, long-term visitors we met while swimming the Caribbean’s azure waters, suggested an area grocery store with a hot-foods section; when we showed up there on Monday, we learned the local dishes were available weekends only. Another recommended “Caribbean” restaurant nearby had permanently closed. On the advice of the Jamaican night guard, with whom we shared hours of conversation and rum, we went to Tony’s, a beach club popular with day-tripping cruise-ship passengers, but it too offered its small selection of local foods on Saturday only.

We settled for local snapper—the more expensive seafood dishes are more readily found during the week—and, two nights in a row, Jamaican jerk chicken, a popular and delicious island import.

When we finally made it to the capital, St. John’s, in the shadow of looming cruise ships, we fared a bit better, locating some tourist-friendly restaurants with a local dish or two, a good Caribbean-drinks stand, and a hole-in-the-wall stewed-meats emporium beloved by locals. (There’s also a very popular Trinidadian roti shop worth a try.) Still, by the eve of our departure, we found ourselves tanned and relaxed—number-one goal achieved!—but a little bummed at how many Antiguan dishes were just out of reach.

We didn’t get it. The local food we had tried was pretty delicious. We wanted more. Where was the goat water? Where was the Caribbean culinary pride?

In four days, we couldn’t put our finger on it, but the dearth of local food—or rather the challenge of easily finding it—seems to stem from a few factors. Antigua’s number-one industry is tourism, and it probably makes more sense to many restaurant owners to serve what they believe tourists want to eat. Namely, pizza and burgers. Shrimp cocktail, Caesar salad, lamb chops. Moreover, food doesn’t come cheap here—most things are imported, as the island lacks much of an agriculture sector, so again, restaurants likely can charge higher prices for so-called continental cuisine. And, as in some African countries we’ve visited, certain dishes tend to be associated with certain days, so it might be hard even in someone’s home to find pepperpot on, say, a Monday. 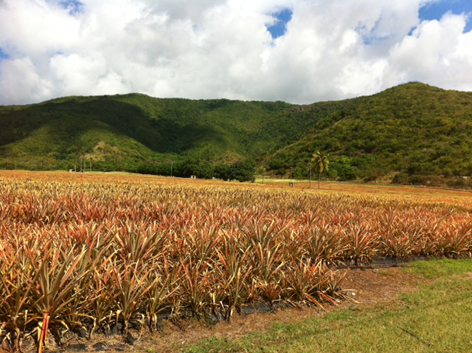 Pineapples are one of the few foodstuffs still cultivated on Antigua

Of course, to us this makes it even more important to track down those places that do serve local dishes, so other interested travelers can experience them as well. We were surprised to meet a lot of return visitors—people who come back to Antigua year after year—who really had no idea what the island’s traditional dishes were, or where to find them. While we discovered there aren’t tons of local restaurants, there are a few options at least, especially if you’re on-island for more than one Saturday.

As for that Caribbean culinary pride: It’s not flaunted about on Antigua, but it definitely exists. Just hours before our flight on Tuesday, we were served plates of piping-hot goat water with fungee and salad at Tony’s. The previous day we’d practically begged the chef, Esther, to make us some, to which she finally relented for the sake of our unborn child. (Her: “Is the baby wanting goat water?” Me: “More than anything!”) Goat water on a Tuesday is nearly unheard of around here. But, man, was it delicious—and Esther knew it. 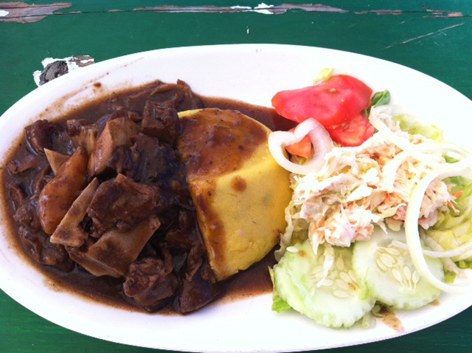 Our Antigua “EYW snapshot” is in the works. Stay tuned for more details on these and more Antiguan dishes!